Why We’re Targeting GM and Toyota 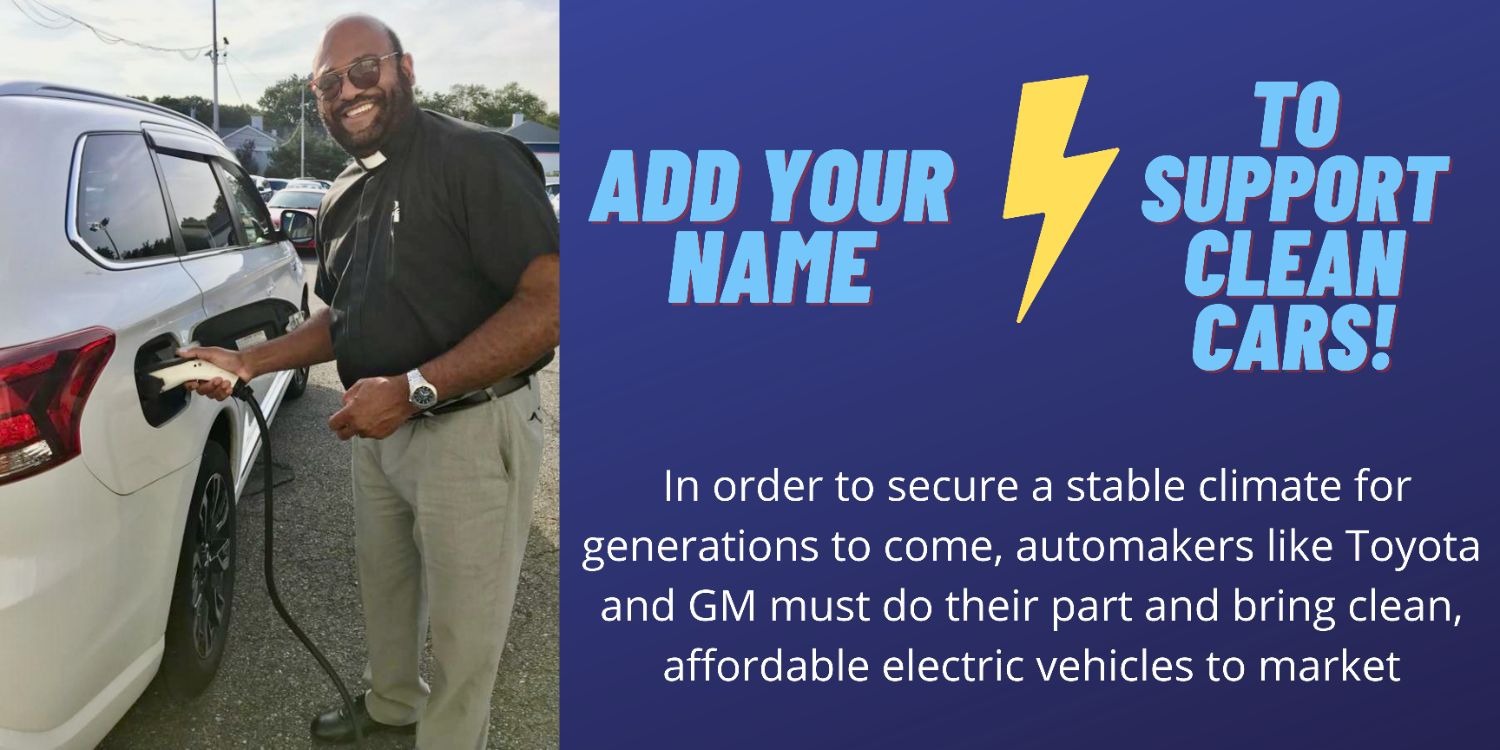 Here at Interfaith Power & Light, we believe that people of faith have a sacred duty to combat climate change and safeguard our Sacred Earth. One of today’s largest sources of climate pollution is transportation, which causes approximately 27% of greenhouse gas emissions in the United States. We believe that electric vehicles (EVs) are a major factor in creating a clean and equitable transportation system. While the government has a significant role to play in setting stringent standards for emissions and fuel economy, automakers are another critical player. Our automaker accountability campaign focuses on two corporations: General Motors (GM) and Toyota. Our ultimate goal for this campaign is simple: at least 50% of the new cars these automakers sell should be electric vehicles by 2030, and 100% should be EVs by 2035. But why exactly are we targeting these companies and not any of the other automakers that are still producing polluting vehicles?

General Motors is one of America’s most iconic companies, and has long been a critical part of the American auto industry. General Motors brands include Chevrolet, Buick, GMC, and Cadillac. GM recently made major announcements in conjunction with the Environmental Defense Fund regarding the production of electric vehicles; in fact, GM publicly stated that its “ultimate goal [is to eliminate] tailpipe emissions from new light duty vehicles by 2035.” While this statement is exactly what we want to hear, we now must make sure that GM follows through with their promises. At the same time as it claims to be all-in on electric vehicles, GM lobbied against life saving clean car standards. GM also has a long history of backtracking on public statements and breaking their promises to consumers. For example, they promised to release twenty new electric vehicle models by 2023, but at last year’s LA Auto Show, not even one was to be seen. Despite their promises, they spent nearly three years pre-pandemic dragging their feet. And as of late 2022, GM has only four electric vehicles on the market. While some other models have been announced, when they’ll be available to the general public is uncertain.

IPL is also concerned about EV equity, as most of GM’s models (both on the market and revealed) are currently out of the price range of many Americans. General Motors has the potential to be a global electric vehicle leader, but it must step up to the plate sooner rather than later.

So while we celebrate GM’s joint announcement with the Environmental Defense Fund, we want to make sure that it actually delivers on its statements. The wider faith community is excited by GM’s promises, but in order to retain this excitement and support, GM must follow through with their commitments. There’s no time left to waste– we can’t afford to push back EV production targets, even by six months. The public needs affordable, clean EVs now. GM must prioritize their production of cost-effective EVs to advance equity and protect the environment.

Our other major accountability target is Toyota. While Toyota was once a global frontrunner in clean vehicle technology, it has become a notable laggard, intentionally resisting EV progress. Toyota is now a global liability on EV sales and production. In the late 1990s and early 2000s, Toyota went all-in on the bold new technology of hybrid vehicles. It now refuses to adapt its strategies to the changing technology of today.

Toyota isn’t just refusing to produce its own EVs, but is actively working to block life-saving clean car standards and vehicle electrification standards in the US and abroad. According to InfluenceMap, an independent think tank, Toyota is ranked the third worst company in the world for its aggressive anti-climate lobbying. The company also actively opposed electric vehicle legislation in the US, UK, and India. Toyota hides behind the Truck and Engine Manufacturer’s Association (EMA), an industry group that lobbies against cleaner vehicle standards and stands in opposition to EV-positive legislation. In addition, from around 2005 to 2015, “the global automaker systematically failed to report defects that interfered with how its cars controlled tailpipe emissions, violating standards designed to protect public health and the environment from harmful air pollutants.” To this day, it is unknown how much pollution could have been prevented if Toyota had proactively combatted these defects. And in 2019, Toyota sided with the Trump administration in a lawsuit that attempted to strip California of its right to set its own, more stringent, emissions standards.

Even today, Toyota relies on its reputation as a “green” automaker to sell more polluting vehicles, but their actions reveal their hypocrisy. We are calling on Toyota to commit to 50% electric vehicles by 2030 and 100% electric vehicles by 2035. It is beyond time for Toyota to reclaim its place as an environmental leader within the auto industry. It is time for Toyota to answer the call.

Both Toyota and GM have a moral responsibility to deliver affordable, equitable, and clean electric vehicles sooner rather than later. We’re out of time– the climate crisis is already knocking on our door. Automakers must follow through with their promises and rise to the challenge of mitigating climate pollution.

As people of faith, we have a special responsibility to advocate for these life- and climate-protecting technologies. We know that communities across the country are ready for bold, new transportation solutions, and clean EVs are an integral step towards addressing climate change for our communities, future generations, and our Sacred Earth. We need your support – read more about IPL’s work on automaker accountability here, and join our fight here.