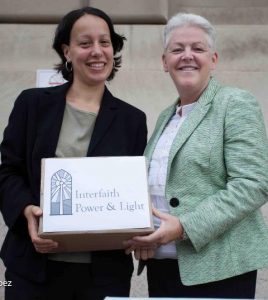 Update: Republican members of the Environment and Public Works Senate Committee ended their boycott. Her nomination passed on a party line vote. The Stand with Gina campaign has set up a toll free line with talking points, that will connect you to your senator if you’d like to thank them: call 1-888-997-5202.

Please take a minute to call your U.S. Senators and let them know of your support for Gina McCarthy, Nominee for the EPA Administrator.

Assistant Administrator for EPA’s office of Air and Radiation, Gina McCarthy has been nominated to replace Lisa Jackson. IPL urges her expeditious confirmation. Ms. McCarthy is a dedicated professional who worked for five Republican governors, including Mitt Romney of Massachusetts, before joining the Obama administration. She has worked with all stakeholders to develop pragmatic and cost-effective safeguards to protect public health and reduce dangerous pollution.

Ms. McCarthy is a clean air, climate, and public health champion. She led the EPA’s development of historic clean air protections, including: the first ever proposed carbon pollution standards for new power plants; the first carbon limits for vehicles; and lifesaving updates of standards that limit deadly soot, mercury and other toxic pollution.

Thank you for taking action on this important nomination today.