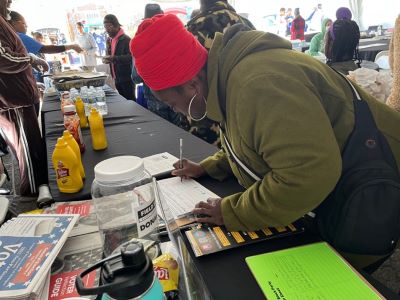 As we bid 2022 farewell and prepare for the climate advocacy work ahead in 2023, I wanted to take stock of the civic engagement work of the Interfaith Power & Light (IPL) network this last year. This effort has helped position us for our work in 2023 as we continue our moral call to care for our neighbors and our environment.

IPL volunteers encouraged more than 730,000 faith voters – many who don’t always vote – to communicate their values of caring for our Sacred Earth by casting a ballot in the 2022 midterm election, including Georgia’s U.S. Senate runoff contest.

Here’s a look at IPL’s 2022 Faith Climate Justice Voter Campaign by the numbers:

Working with the Yale Program on Climate Change Communications and Georgetown University Assistant Professor Parrish Bergquist, we conducted an experiment on the text messaging campaign to measure how various initial messages boosted voter turnout. We expect to have the experiment analysis available in early 2023. (A similar experiment in 2020 showed that IPL’s texting outreach increased voter turnout by 1.7 percentage points – three times more effective than benchmark campaigns.)

76 “congregation captains” in the campaign proved to be committed and creative as they organized their faith communities to engage and mobilize faith voters to communicate their values of caring for our common home and loving our neighbors through voting.

IPL designed the voter guide, available in English and Spanish, to stimulate the kinds of conversations that people of faith and conscience need to have in order to renew our democracy.

“The release of this guide comes at a moment in time when we are seeing the threat to our democracy that voter suppression poses, and when the intersections between climate change, global health, systemic racism, and other moral issues are on the ballot,” said IPL President Rev. Susan Hendershot when the guide was released in June. “The time is ripe to examine how our spiritual and religious beliefs can and should be serving the greater good, through dismantling structures of oppression and curing the disease that threatens our common home. We know that if we want a country that reflects our highest values, we have to participate thoughtfully in elections.”

By focusing on several college campuses, IPL affiliate Pennsylvania Interfaith Power & Light registered 211 of the 226 people who registered to vote through the Campaign. In IPL’s voter registration training with When We All Vote, Priestley Johnson said, “We know that when unregistered voters are engaged by an organization that they know and trust, their likelihood of registering and turning out to vote increases dramatically, and that is exactly where each of you all come in. You all come in because your superpower is trust.”

A Pennsylvania IPL fellow persevered through a rough first day of voter registration, decided to keep fighting, and returned the following day to register 20 voters in one day.

Voting is a sacred duty – however, too many Americans of faith and conscience don’t vote, especially in midterms. Their voices matter, and with our volunteers’ help, they made themselves heard in this election. Our volunteers reached people where they are – on their cellphones, via text message. Each text was sent by a volunteer at an IPL faith voter text bank event on Zoom.

Here’s what some IPL volunteers said about the experience:

In advance of the election, IPL offered digital gatherings for volunteers and supporters to:

IPL and The One America Movement also offered an online training called “How to Talk to Your Neighbor – Have Important Conversations with People Who Believe, Think, and Vote Differently Than You Do.” (Contact Tiffany Hartung to express interest in learning more about this training.)

IPL also provided a post-election briefing on impactful moments from the campaign and what the election results might mean for climate progress in 2023. A playlist of all Campaign webinars and short videos is available here.

To educate voters, Georgia Interfaith Power & Light (GIPL) collaborated with its partners in ProGeorgia’s environmental justice workgroup to produce the “Environmental Justice Ballot: A Voter Guide on the Environmental Impact of the November 8, 2022 General Election. GIPL and its partners intend to continuously update the guide to educate voters on the connection between some climate issues in Georgia like coal ash, protecting the Okefenokee Swamp, and high energy bills, and the people who are elected to make decisions. GIPL also provided mini-grants to faith communities to resource their participation in get-out-the-vote activities. In this video, GIPL Executive Director Codi Norred describes how they organized and partnered in Georgia.

Detroit pastor Ken Grant called on faith voters to act, and the National Catholic Reporter outlined the campaign in August.

Join me in celebrating the faithful work of IPL affiliates and volunteers in the 2022 midterm elections as we close out the year. We thank everyone who worked on the Faith Climate Justice Voter Campaign. Together, in 2023, we will continue fighting for a more just and healthy climate and environment for all.

* These voters are people of faith who are alarmed by the climate crisis yet don’t vote often or at all.