Lots of people talk about climate change, but Interfaith Power & Light state affiliates take action, too. Here are some recent and upcoming activities undertaken by our state organizations. 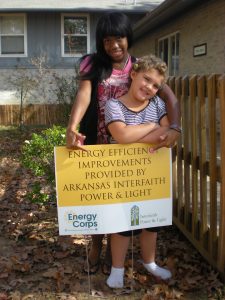 On January 21, volunteers will continue to work on sealing cracks and open spaces in utility closets. Fiberglass insulation will be added to part of the attic. January 21 will be the third and final Mission Day at Vera Lloyd. Volunteers are encouraged to bring work gloves and tools. Get more information from www.arkansasipl.com.

In the Pacific Northwest, people of faith had a huge presence at the recent Cherry Point Coal Export Terminal scoping hearings, thanks to the efforts ofÂ  Washington Interfaith Power & Light. The largest hearing, held at the Washington State Convention Center in Seattle, drew more than 2,300 people. “We had more than 200 Earth Ministry/Washington Interfaith Power & Light members and many more people of faith attend,” reports LeeAnne Beres, executive director of Earth Ministry and Washington IPL. She notes that many member congregations brought their entire green teams, and about 30 religious leaders were among the 180 speakers. 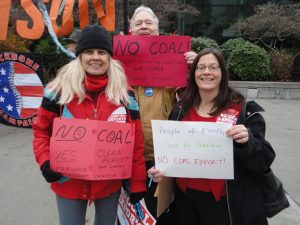 Jessie Dye of Earth Ministry-Washington IPL says people of faith have been organizing for two years across four states to fight a plan to ship coal from the Rocky Mountain region to China via proposed coal shipping terminals in the Pacific Northwest. “The problem is that to get it from here to there, 150 million tons of coal have to be stripped on the high plains, shipped 1500 miles by rail, piled up at deep water ports in Washington and Oregon, and then sent by huge boats to China,” she notes. “This violates treaty rights of several tribes, distributes toxic coal dust all along the rail lines, splits railroad towns in half, ruins fisheries and tourist areas, and does this at tax-payer expense for all rail improvements.”

Writing about the hearings at Grist.org, Claire Thompson noted the “impressively diverse range of interests opposed to the terminal. A pastor, a Muslim woman, and a Jewish man each spoke of the obligation to protect and care for God’s Creation.” (Read more here.)

The December scoping hearings were designed to get public comments on the scope of an environmental review for the Cherry Point terminal in Washington’s Whatcom County. “The coal companies want a little tiny scope-only the 140 acres of the port itself,” Dye says. “We want the whole scope-including the life cycle of this coal, from mine in Montana to air quality in China, to be considered, as well as the effects of all of five of the port projects.” People from the Northwest and beyond are welcome to submit written comments to comments@eisgatewaypacificwa.gov by January 21, 2013.

Because the environmental review process could take up to two years, “We are now supporting legislation that will promote clean energy investment in Washington,” adds Dye. “It’s not just what we are against, but we are supporting better energy alternatives in our legislature this year.” Contact Washington Interfaith Power & Light to learn how you can help. 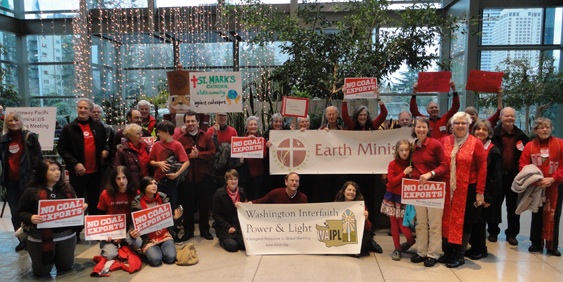