As our elected officials are getting our phone calls and our emails we can also reach out to them on social media platforms. We know this has been having an impact as business as usual has been stalled because of all the calls from concerned people like you. We can also inundate them with mentions in social media. Here are a few tips on how you can tell your vigil story and join your voice with those across the nation to make a bigger impact.

Use visual stories. Take pictures or videos and post them on places like Facebook, Twitter, Intagram, and Google + Tell the story of the vigil. Why people are there, what actions they took, how they became inspired. A study conducted by psychologist Albert Mehrabian showed that 93% of communication is nonverbal, since visuals can be processed by the mind 60,000 times faster than text.

Use tags so people who are interested in what you are talking about can find you. #peoplesclimate is the over all tag for all the actions going on for the first 100 hours. You cal also use tags like #AllAreCalled #actonclimate #first100hours

Tag individuals you want to reach or acknowledge. Make sure if you are putting the individuals twitter name first in your message you put a period before their name or it will become a private message instead of a public post.   ( IE: [email protected] I am at an interfaith vigil to pray for national action on climate)

Find Elected Official’s twitter names. If you want to target your senators you can find a list of their twitter and Face book accounts here http://www.socialseer.com/resources/us-senator-twitter-accounts/

Creating social media advertisements If you are not a graphic designer but want to make some nice images to advertise your event a great tool can be found at https://www.canva.com/

Take a photo at your vigil and tweet it along with a short message.

As a person of faith, I am concerned about your cabinet nominations. @RealDonaldTrump I am joining this vigil to support climate action

I am gathered with people of faith today to pray and take action on climate. What will you do @RealDonaldTrump? #PeoplesClimate

Consider using the Facebook Live feature to capture a powerful moment at your vigil. Or take a video and post it later.

Take photos and tell the story of your vigil and how it invigorated, inspired and educated your community.

Text you can use about the vigils:

We are concerned that President Trump, after indicating he will abandon important policies to curb the pollution that causes climate change, has nominated climate deniers and fossil fuel advocates to lead his cabinet.

We ask members of Congress to support nominees who are guided by science, respect our current environmental laws that protect our health, and recognize that leadership on climate is a moral imperative for our nation.

Protecting our health, preserving Creation, and revitalizing our communities all depend on climate action.

You can link these images to:  https://www.interfaithpowerandlight.org/vigils-for-the-earth-during-the-first-100-hours/ 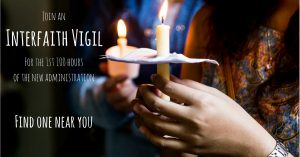 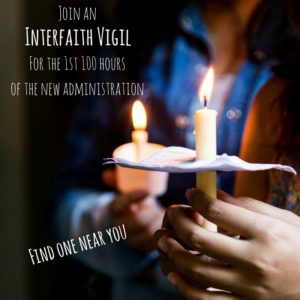 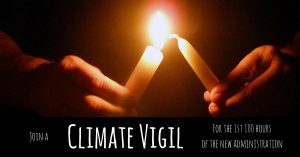 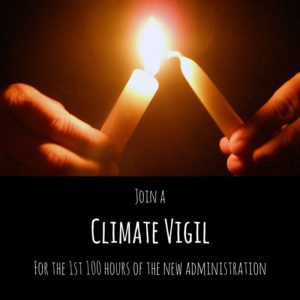