As I entered the Center today I was greeted by some of the many wonderful young people in green elf costumes and a polar bear singing the 12 days of Christmas. This is a summary of the meeting thus far from the Ecosystems Climate Alliance:

On the tenth day in Denmark the UN gave to me:

Let me offer several reflections of where it seems we stand at day 10 from taking in life here and at the KlimaForum or the People’s Forum which is near downtown that I attended yesterday. While the formal meeting seems to be slogging along, a long term human rights worker from Sri Lanka told me that she believes that this is the first time that the voices of the island nations and people of the South have perhaps been really heard at the table. There is a tension in the air as we move into the final week. Will any meaningful agreement really happen? The tension moves into anger on some levels and it was very evident among the island nations and people of the South at the KlimaForum yesterday. There are enormous issues of human rights, and reparations for climate debt and financing for adaptation, emissions reductions and simply respecting all people upon the planet with equality. I have heard no one here doubt climate change, as is the conversation by some in the US. Here the demands of reparations for climate debt rise as do the waters.

At this forum, I feel like a global citizen first, but everywhere I go I hear and see that the United States is the worst polluter, the richest nation and the one least to listen and act for the common good. Yesterday this weighed heavy on my heart. I did attend a Caritas Mass last night and was moved that they chose to sing Amazing Grace, not knowing the history that it is a song telling the story of conversion of a slave trader. Today we in the United States are engaged by our lifestyles and public policy in a different type of slavery of Earth and a number of her people. Perhaps this meeting will be or lead to a moment of Amazing Grace.

Today is the large demonstration of 50,000 in the city and the numbers here at the Center are swelling to the maximum of 15,000. 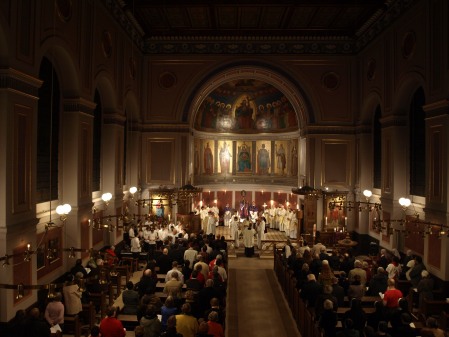 I invite you to actions of conversion of lifestyle and actions of hope this day. A short prayer from Caritas last night:

O God, open the hearts and minds of the rich nations that they may help all those suffering from the impact of climate change–as the earth hardens, rivers dry up, crops fail, children starve, the rain does not come. As floods and cyclones ravage your earth ever stronger; as glaciers melt, sea and reiver levels rise, animal and plant species die out, and island homes, ancestral lands of our brothers and sisters, sink below the oceans.