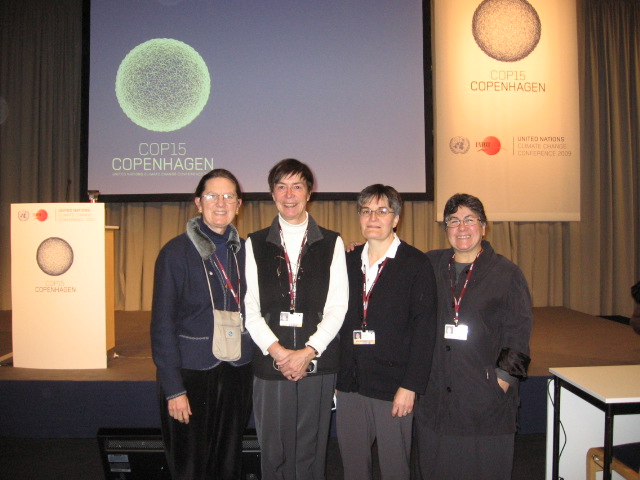 Joan with some of the Franciscans International NGO Delegation

Warm greetings from a VERY cold and snowy and chaotic Copenhagen. Amidst all, the Danes have been so hospitable these challenging two weeks.

Today, I spent much time viewing the proceedings on enormous screens in a hall for NGOs and also took in an exhibit on the Arctic thaw near the place of the Little Mermaid, whom I shall visit tomorrow morning before heading to the hall again. NGOs from island nations, Africa and Latin American were walking about various places today (freezing I am sure). Since NGOs were not allowed in the Bella Center everyone tried to find a spot to wait the time through, praying for a meaningful negotiation.

At COP 15 there have been a number of elephants in the room, that have hardly been mentioned. One came glaring to my eyes as I read COP 15 Post, Daily Climate Conference News. Prominently, page 11 is a full page star spangled Lady Liberty ad entitled; Message From America to the American Delegates in Copenhgen and the Rest of the World. (View the ad) Quoting the Constitution throughout it states: We Reject Taxation without Representation even if it is attempted by our President through an international `political`agreement like the Copenhagen 15.

Finding this ad in a publication supporting action on climate change was at first shocking and then disheartening. I immediately borrowed a friend’s computer to google and follow the money trail of the American Solutions for Winning the Future. I did not go to their website www.AmericanSolutions.com but googled an analysis of who the money holders are. Corporations and their part in climate change has hardly been touched upon at COP 15, yet, they are the ones controlling the governments, conversations and politics.

The American Solutions is funded by some of the wealthiest men in the United States (another elephant in the Bella Center, the gender issue). Those behind the ad and the threats include: Carl Linder of Chiquita, George Argyras who reportedly contributed millions to elect George Bush and was awarded Ambassodorship of Spain though he does not know Spanish, Stanley Hubbard of Hubbard Broadcasting in Minneapolis, Peter Thiel who is a young millionaire engaged in hedge funds, Dick Farmer known for union busting and Roger Milliken a textile industry billionaire. My friend needed her computer so my research was short, you can do your own.

I am again reminded in being here that many of us in the US need to open our eyes wider to an analysis of where information stems that does not support the science of climate change? Who are the voices saying we do not have enough money to help brothers and sisters with adaptation and mitigation when we bailed out banks and spend the most money in the world on the war industry? Who are the voices saying we cannot make goals of high emissions standards?

If we do not open our eyes, ears and hearts soon the rest of the world will leave us behind standing ever so alone in a world community that chooses to work together for a future for the children and all species.

I am off to bed. I plan to visit the little mermaid and a special artistic statue next to her that was created for the climate meeting….if I get a picture I will share it with you. Thank you for your prayers, fasting, acts of kindness, phone calls and light to our world this day.

Peace and good,
Your sister,
Joan