I have just had wonderful homemade fresh bread, soup and glÃ¸gg (a traditional Danish hot drink) and wonderful conversation with my Danish hosts Michael and Mia. Now I will fill you in on the amazing events of Saturday and Sunday.

While it is difficult to talk with the actual US delegates, I am finding it much easier to talk with those of the less powerful countries. Yesterday I had a very informative lunch with a Bangladesh NGO delegate who is an official government delegate simply because Bangladesh could not afford to send many people to the COP 15. I learned about reforestation projects in Bangladesh where people are living in water because land is being drowned.

Later in the afternoon I joined the 100,000 person march and candle vigil with a dear sister from England. Because we came late we started at the back and walked through floats, banners, police lines, songs and voices of many nations until we came to the front block of thousands. I felt like I had traveled through the world in a short time. The demonstration was basically peaceful and incredible to be part of the largest climate change march thus far on the planet and so international. 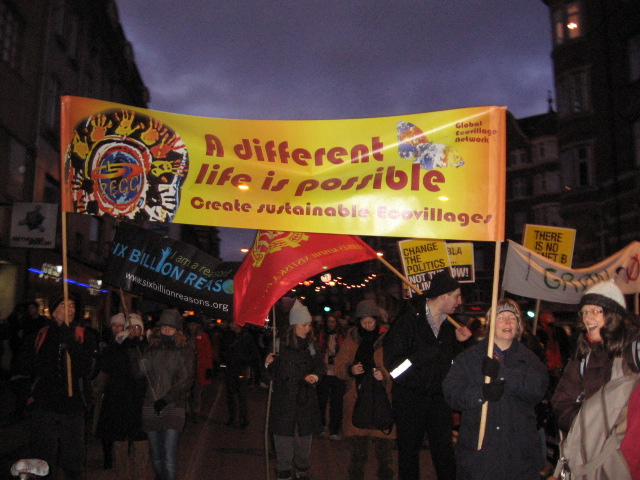 Today, Sunday, began by attending Count Down to Copenhagen event in the City Center where Archbishop Desmond Tutu spoke and the 512,894 signatures gathered by Countdown to Copenhagen were given to the UN official to take to the COP 15. Before Archbishop Tutu spoke there was music and I was in front of glorious Danish youth who danced and sang the theme song of Hopenhagen:

I asked the young people about the song and dance and they said, we must sing and dance even with the critical issues because these are expressions of life and we are humans and not robots.

Their sentiment spilled over into Archbishop Tutu who danced about on the stage and was so joyful as he addressed the serious nature of the work ahead. He noted that the wealthy countries say 150 billion dollars is too much for adaptation and helping the vulnerable, suffering from climate change, yet, how much was spent on the bank bail outs and on war.

He said, when God looks down and sees Darfur, Gaza, Zimbabwe and Afghanistan God is crying and asks, “Why did I create humans?”

Then God sees Copenhagen and God begins to smile and say, “Look what my children are doing. You are wonderful because you are telling politicians, and developed countries to reduce emissions…we do not want a political argument, we want a politically binding agreement. Join us, join the winning side.”

Amidst the great live music and dancing after his speech, and presentation of the signatures, I walked to the Church of Our Lady Copenhagen Lutheran Cathedral for the Ecumenical Celebration for Creation. This most significant religious celebration of COP 15 was inspiring. I was blessed to have a very good ticket. I was in the front.

A presentation of the symbols of climate change was very profound: Glacier stones from Greenland, dried up maize from Africa and bleached chorals from the Pacific Ocean carried by children. 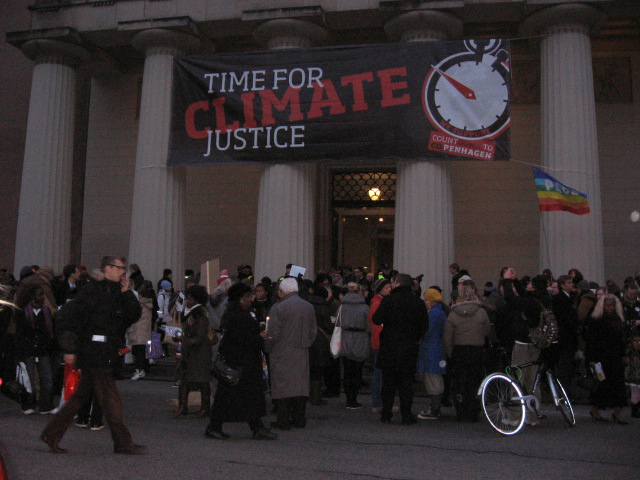 What a gift to hear and be a few feet from the Archbishop of Canterbury, Dr. Rowan Williams as his words touched hearts in the Cathedral. His was a message of turning from fear to Love. Love casts out all fear. What will move us to the right decisions is Love and not fear. We cannot show the right kind of love for humans without keeping and loving Earth as home. We are here as people of faith to speak and act strongly out of Love to address climate change.

My few words for the day and now I am off to bed. Again, I invite you to one more small step toward sustainable living and loving today and tomorrow. The maize, choral, glaciers, friends from Bangladesh, children and the Rev. Tofiga Falani from the island nation of Tuvalu are depending upon our Loving bold actions to cast out fear.

Peace and good,
Your sister from COP 15
Joan