It was a timely day for a panel discussion of a new survey regarding Californians and the environment, less than 24 hours after a Bay Area oil refinery burst into flames on August 6.

Roger Kim, executive director of the Asian Pacific Environmental Network, spoke about how people in the Richmond area are affected by the Chevron refinery’s presence every day, not just when disaster strikes. Rev. Daniel Buford of Allen Temple Baptist Church in Oakland noted that Richmond is the northern point of a “Toxic Triangle” linking that East Bay city with Oakland to the south and the San Francisco neighborhoods of Bayview and Hunter’s Point.

Findings in the Public Policy Institute of California’s July 2012 survey pointed to how Blacks and Latinos perceive air pollution and global warming to be serious and personal issues, and showed that communities of color also have the strongest levels of support for government action on global warming, including California’s law to reduce greenhouse gas emissions to 1990 levels. In fact, if Tuesday’s panel – sponsored by New America Media at the World Affairs Council of Northern California – had one theme, it’s that local community organizations aren’t waiting for state and federal officials to take action, but are moving ahead to address environmental issues on the grassroots level. Much of this activism is happening through faith communities. 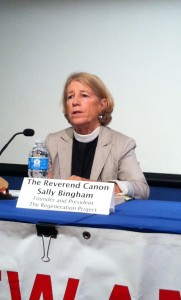 The Rev. Canon Sally G. Bingham, President and Founder of The Regeneration Project and its Interfaith Power & Light campaign, noted how the more than 560 congregations in the California IPL network (and more than 14,000 nationwide) include such diverse faith communities as Grace Tabernacle in the Bayview, Our Lady of Guadalupe Catholic Church in Hermosa Beach, and Second Baptist Church in Santa Barbara. “People want to do the right thing,” The Rev. Bingham said. “God calls us to love our neighbor, and when you love your neighbor, you don’t pollute their air.”

In 2010, Grace Tabernacle marked Juneteenth – the anniversary of the Emancipation Proclamation – by placing a solar array on its roof and declaring its independence from its local utility company. Our Lady of Guadalupe was the first church in the Los Angeles Catholic Archdiocese to install solar panels on the roofs of both its church and its school. Rev. Buford of Allen Temple explained his job title – Director of Prophetic Justice Ministry – by saying that he and others in his congregation who work for environmental justice are serving as “policy analysts for God,” in everything from speaking out about conditions in the Toxic Triangle to engaging parishioners in intergenerational community gardens. The PPIC study showed that 63 percent of Blacks surveyed believe action on global warming will create jobs.

Putting environmental justice activism on a plane with other human rights issues isn’t always obvious to clergy, but once they awaken to the moral implications of climate change, it’s like a light being turned on. In fact, The Rev. Bingham noted how a colleague in Georgia – The Rev. Dr. Gerald L. Durley, who sits on The Regeneration Project board – had that insight while watching the documentary film The Great Warming.

“The truth about the condition of the environment and what we are and are not doing was absolutely blinding,” she read from Rev. Durley’s contribution to Love God, Heal Earth, a collection of 21 essays on the connection between faith and the environment. “When you are enlightened, you must then make choices about whether you will remain in the darkness of ignorance or seek the light of understanding.”

Read more about the panel discussion at New America Media and on Twitter.