A diverse range of faith voices came together today to speak for Creation and clean air at public hearings in Washington, D.C., and Chicago, where the Environmental Protection Agency took testimony on its proposal to limit global warming carbon emissions from new power plants.

“For too long, those who operate our power plants have been permitted to gain their livelihoods at the expense of people’s heath,” said Joelle Novey, director of Greater Washington Interfaith Power & Light, who cited rabbinical teachings against the practice. Novey said religious people are “heartsick” about the role of coal power in producing climate change and an epidemic in children’s asthma rates.

“We’re standing on the precipice of Hell,” said the Rev. Doug Hunt of Pennsylvania Interfaith Power & Light, adding that the EPA proposal is “a step back our children and grandchildren demand that we take action.” Trieste Lockwood, director of Virginia Interfaith Power & Light, said, “Air pollution disproportionately hurts vulnerable communities. This is a moral issue.” 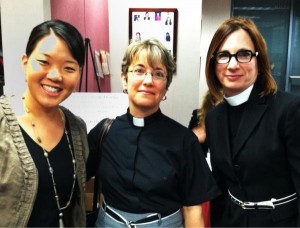 In Chicago, the Rev. Dr. Clare Butterfield, executive director of Faith in Place and Illinois Interfaith Power & Light, told of a recent clergy tour of coal mining areas in central Illinois. “We stood at the base of the slurry impoundments, and we thought about what will happen to the rivers of our state, and to our fields, if that impoundment wall breaks and the billions of gallons behind it spill out,” she said.

The Rev. Myriam Renaud said, “Here in Chicago, we’ve learned the hard way about the cost of having two of the nation’s oldest and dirtiest coal power plants in our city limits we’ve learned that those plants are especially noxious to the elderly and to our children.” She concluded with a paraphrase of Psalm 79: “Dear God, we have made a mess, but we are your hands in the world. We give thanks for life. We will repair all we have laid waste.”

There currently are no limits on emissions from existing power plants, which are the largest source of global warming pollution in the United States. People of faith who would like to help “repair all we have laid waste” through support of the EPA’s proposed limits can submit comments through June 25, 2012.