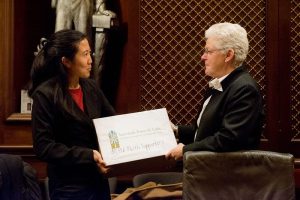 Representatives from 17 religious organizations meet with Environmental Protection Agency (EPA) Administrator Gina McCarthy Tuesday, Nov. 18th at 3:30pm to highlight the support of the faith community on the rules to address carbon pollution from power plants.

Interfaith Power & Light (IPL) will be represented along with: U.S. Baha’i Office of Public Affairs, Church of the Brethren, Church World Service, the Coalition on the Environment and Jewish Life, the Columban Center for Advocacy and Outreach, Creation Justice Ministries, Evangelical Lutheran Church in America, the Friends Committee on National Legislation, the Islamic Society of North America, Maryknoll Office of Global Concerns, National Religious Partnership for the Environment, the Presbyterian Church (USA), the Religious Action Center for Reform Judaism, Sadhana Hindu, Sojourners, and the United Methodist Church.

The Rev. Sally Bingham, founder and president of IPL said, “we urge the EPA to move forward with the proposed standards for existing power plants so that we can reduce carbon pollution as quickly as possible to address climate change, protect human health, and care for all of Creation.”

The IPL community is working to make congregations models of energy stewardship and to lead by example. But our actions alone will not be enough, as power plants are responsible for 40% of carbon pollution. IPL congregations encourage their members to submit a comment in support of the proposed carbon standards for existing power plants, and to encourage the EPA to adopt a strong rule that increases the role of renewable energy and efficiency in our power mix.

“People in our religious communities understand that climate change is real and are heart-sick about the suffering it causes our neighbors close to home and around the world,” said Karen Leu of the Greater Washington DC affiliate of IPL. “With today’s delivery, we’re giving Administrator McCarthy not only over 10,000 comments from the faith community, but abundant hopes and blessings for the EPA to take decisive action and limit climate pollution.”