Read with us this summer

Summer is here, and it’s time to dive into a good book (right after you dip into a cool pool). This is the time of year when “the livin’ is easy,” yet record-breaking temperatures, wildfires, and air quality alerts across much of the United States remind us that the work we’re doing to make global warming a moral issue is as urgent as ever. The Interfaith Power & Light staff would like to share a few suggestions for books – whether you read them on the beach or on your lunch break – to inspire and inform your Creation stewardship work this fall and beyond. 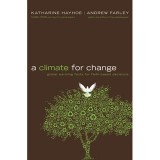 The Rev. Canon Sally G. Bingham, founder of The Regeneration Project and its Interfaith Power & Light campaign, recommends A Climate for Change: Global Warming Facts for Faith-Based Decisions (FaithWords, $14.99) by climate scientist Katharine Hayhoe and her husband Andrew Farley, an evangelical minister. “I have always said that religion would not have a prayer without science. This inspiring book brings the two disciplines together like no other,” Sally says. “A Climate for Change is a factual book that reads like a novel. Christians will be compelled to put their faith into action, and people from other traditions will understand the science of climate in a new and different way. When science and religion come together the way they do in this book, people everywhere will be better informed of our moral responsibility to act to protect Creation.”

“It’s a great book for anyone interested in the psychology of change. What motivates people? Why don’t people change their behavior, when all rational arguments point to the urgent need to do so? And what happens when they do? For those of us looking to inspire change at the societal level, this book is essential reading,” Susan says. “After all, society is only a collection of individuals. Chock full of examples of successful change-making strategies, from personal to the collective, this is the most useful book I’ve read in years.”

Jessica Abell, who is with us this summer as interim office manager as she completes her ordination process in The Episcopal Church, recommends Carbon Dharma: The Occupation of Butterflies by Sailesh Rao (Climate Healers, $14.99). Jessica says, “Sailesh Rao is an engineer whose life was turned around when he saw Al Gore’s slide show that became the Oscar-winning film An Inconvenient Truth. Rao recalls asking his wife, ‘What was the use of leaving our children a pile of money when the planet itself was going to be desolate and unfit to live in if we don’t solve the climate crisis?’ Using the Hindu concept of Dharma, or right actions, Rao has written this book to address people under age 30, whom he calls the Miglets (Most Important Generation that ever Lived on Earth). The book is full of simple suggestions to curb consumption such as monthly, quarterly, or annual ‘Buy Everything Days’ – on which a household buys everything except for perishable foodstuffs – all at one time” and avoids mindless shopping trips otherwise.

Although he hasn’t read it yet, affiliate services director Bill Bradlee hopes to check outÂ A Great Aridness: Climate Change and the Future of the American Southwest by William deBuys (Oxford University Press, $27.95). “This book looks to be a readable environmental history along the lines of Marc Reisner’s Cadillac Desert,” says Bill. A Great Aridness recently drew praise from Juliet Eilperin, environmental reporter for The Washington Post, recommends it to “non-experts who want a concrete sense of climate change’s impact – and a lyrical reading experience.”

Redgie Collins, who is volunteering at Interfaith Power & Light this summer before an upcoming year in Ghana (where he will send reports from our Carbon Covenant project there with the Evangelical Presbyterian Church) recommends Four Fish: The Future of the Last Wild Food by Paul Greenberg ($12.99, The Penguin Press). “Four Fish explains the phenomenon of overfishing and fish farming by delving into the history of cod, bass, salmon, and blue-fin tuna. The author blends personal experience with a host of convincing facts, interviews, and historical examples to paint a bleak picture of the declining yield from the world’s oceans,” Redgie says. “The ocean is an integral part of our Earth’s ecosystem, and Four Fish is a great way to learn how to make smart choices in order to preserve a natural resource for our future generations. Can we band together to address a problem that affects every nation that relies on the ocean for food? Paul Greenberg’s book will help you become an more informed steward of Creation and will give you a better idea of how your personal seafood choices affect the health of the world’s oceans.”

Andree Duggan, national campaigns manager, does most of her reading online. She says, “If you’re feeling a little weary of the doom and gloom of climate predictions, I would highly recommend a virtual summer reading trip to MIT’s Energy Initiative website for a refreshing and hopeful glimpse at solutions in the works. There you will learn a bit about almost everything climate-related that’s cutting edge, including the latest developments in desalinationÂ technology and a path to a gasoline-free future. Â Be sure to read the latest issue of Energy Futures magazine with fascinating articles, including the latest on the smart grid, better biofuels, and programs for green cities.”

Julie Fanselow, communications director, recommends Fool Me Twice: Fighting the Assault on Science in America by Shawn Lawrence Otto (Rodale, $24.99). “Despite its combative title, this book offers clear insight on how our nation might bridge its current divide on matters of science. It’s a good primer on how America, a nation founded by scientists, has turned its back on that proud heritage; why our nation’s scientific debate – especially on climate change – has become so intractable; and how we might finally dig out of the rhetorical rut in which we find ourselves,” Julie says. “Here’s a sample quote:  ‘ It is hard to imagine a creative, spirited preacher who would not be continually excited and grateful for the ongoing flow of opportunities for ethical reflection afforded by science ‘”

Other books we’ve been reading include:

Sacred Acts: How churches are working to protect Earth’s climate by Mallory McDuff ($17.95, New Society Publishers), which includes a chapter by LeeAnne Beres and Jessie Dye of Earth Ministry-Washington Interfaith Power & Light and an afterword by The Rev. Sally Bingham.

Greening Spaces for Worship and Ministry by Mark A. Torgerson ($18, Alban) which draws on both Jewish and Christian traditions and theology in its case studies of ten congregations that made their new or existing buildings more sustainable.

Speaking of books, we are closing in on 3,000 likes on our Facebook page and to get there, we are offering an autographed copy of Love God, Heal Earth to ten people who like us on Facebook between now and July 31. Don’t miss out! Love God, Heal Earth ($17.95, St. Lynn’s Press) includes essays by Sally Bingham and other leading voices from a wide array of faith traditions who agree that we have a sacred duty to protect the environment.

You can also use our Facebook page to recommend other books to people who have an interest in faith and the environment. And be sure to check out the many books, films, and other resources listed on our website.