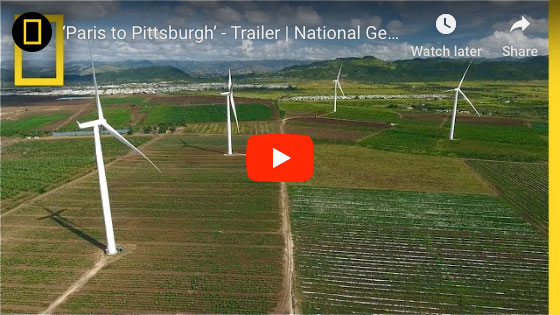 Thanks to a partnership with Bloomberg Philanthropies nearly 700 congregations were able to screen Paris to Pittsburgh in 2019! Free screenings are no longer being offered but you can view this popular and uplifting film online. See the link below. Many congregations who screened the film recommend it highly to draw faith communities together to inspire local community action to heal the climate for the benefit of all.

Paris to Pittsburgh, is a film from National Geographic, produced by RadicalMedia in partnership with Bloomberg Philanthropies and is narrated by Emmy® and Golden Globe® Award-winning actress and activist Rachel Brosnahan (“The Marvelous Mrs. Maisel”).

From coastal cities to America’s heartland, Americans are demanding and developing real solutions in the face of climate change. And as the weather grows more deadly and destructive, they aren’t waiting on Washington to act. Learn about their incredible stories in Paris to Pittsburgh, and be inspired to create change in your own community!

If you are going to show the film to your congregation by streaming it online – click here for IPL’s specially created hosting kit that includes faith-based discussion questions and resources.