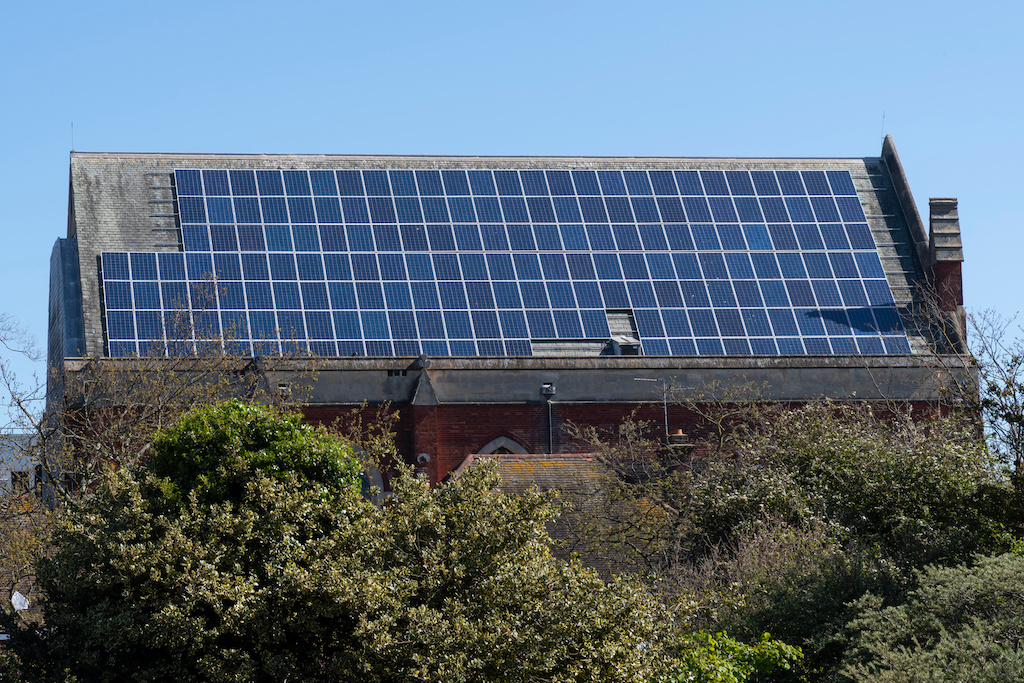 Congregations from all faith traditions in the United States have dramatically increased their investments in solar PV systems for both their environmental and financial benefits.  Interfaith Power & Light (IPL) completed its third survey of congregations in the United States with solar Photovoltaic (PV) systems in December 2021. See the full list on IPL’s website here: https://www.interfaithpowerandlight.org/congregational-solar/

“This latest survey demonstrates the cumulative impact that communities of faith are having when it comes to acting on climate change, the greatest moral issue of our time. Congregations are leading by example, by reducing emissions in their own facilities and adopting solar. This inspires action by their members in their own homes and businesses, and by others in their communities,” said Rev. Susan Hendershot, IPL’s president.

California is the state with by far the greatest number of congregations to implement solar PV systems; the PV systems installed by 305 Congregations provide 27 MW of capacity.  Other regions with large numbers of congregations that utilize solar energy include Massachusetts (130 congregations), Washington, D.C., (61), Indiana (60), Wisconsin (50), and North Carolina (41).  In only two states, Mississippi and Wyoming, did we find no congregation utilizing solar power. Adjusted for population, on a per-capita basis, the District of Columbia, Vermont, Delaware, Massachusetts, and Hawaii are in order the top five in which congregations have installed PV systems.

While part of the tally includes congregations with earlier installations not previously identified, IPL believes the significant increase from the prior survey is primarily due to two major influences. First is the increasing commitment of members of the faith community across the religious and geographic spectrum to address climate change.  Virtually all faith traditions have expressed the need for creation care or stewardship either explicitly or implicitly as in Pope Francis’ Laudato Sí encyclical, the United Methodist Call for Stewardship and Justice (#1033), or the Jewish concern for Tikkun Olam (healing the Earth).

The second major influence is the increased affordability of Solar PV systems and their increasingly favorable economics. The steadily declining cost of installed PV systems coupled with a proliferation of firms and faith-based organizations offering financing has supported this expansion. The expansion of lease availability, Power Purchase Agreements (PPAs), Property-Assessed Clean Energy (PACE) programs, and support from denominational sources such as the Presbyterian Church Investment and Loan Program and the United Church of Christ Cornerstone Fund have allowed congregations to finance PV systems over 10- or 20-years, while lowering their combined PV + electric utility monthly payments.  In addition, members of congregations in Michigan, New Jersey, and Texas have formed LLCs to purchase systems for the benefit of their congregations.

“States’ solar and utility policies make a significant difference. Changes in legislation in Nevada and Arizona (and elsewhere) have made noticeable and favorable changes in the prospects for solar PV systems.  Conversely, Wyoming, one of the two states in which no congregation has installed a PV system, doesn’t permit third party (leasing) ownership; this prevents non-profit congregations from benefitting from any tax credits.  This is why we remain concerned about possible adverse developments in states such as California” said Rev. Hendershot.

Father Tom Smith, Director of the Holy Cross Retreat Center in Mesilla, New Mexico expresses an attitude shared by many congregations that have installed solar PV systems, “We are strong believers in the importance of caring for our common home, as spoken by Pope Francis in Laudato Sí.  As part of that commitment to care for the Earth and who we are and as part of our Franciscan tradition, we have decided to have 200 solar panels…  We do this because the sun is always there, especially in southern New Mexico. There’s lot of sun to provide energy for us and to reduce the use of carbon and oil and gas. We believe that it’s important for us to do our part to help people see the need to change the climate. It’s been a reality that our world is being affected. We want to keep it as natural as we can.

We’re also concerned because it helps us save money. This is an expensive project, of course. But after 15 years we get a significant refund and every year we’re getting tens of thousands of dollars savings on our electricity bill.”