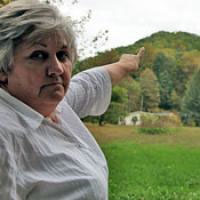 My name is Lorelei Scarbro and I’ve made a commitment to stand up and fight for Creation. I wasn’t always a fighter. But I’ll tell you this – there’s nothing like seeing your home, your community, and your culture destroyed to make you into one.

I was a perfectly happy stay-at-home mom for 26 years. I had my own craft store, and was content to sit in that shop day in and day out. My husband had a pretty decent union job. A lot of us around our part of West Virginia did.

The trouble was, we were working for a killer – Massey Energy. And that killer took everything in its path – the trees, the wildlife, and even the very mountaintops – squeezing every last bit of life out of our corner of West Virginia until it looked like a place so barren you’d never guess it used to be filled with life. It even took my husband. I lost him to black lung.

That killer is coal mining. And mining – dominated in our community by Massey Energy – won’t stop. It won’t stop its relentless efforts to devour yet another 6,600 acres of our home in another mountaintop removal mining project. It won’t stop its stranglehold on our local economy. And it won’t stop using its deep pockets to fund the lobby for keeping things just the way they are.

It won’t stop until we speak out.

It makes me sick to think of it. They’re not just changing the Appalachian way of life; they’re decimating it. Our history, our culture, and even our lives are being lost – all in the name of dirty energy and profit. And stories just like ours are playing out in communities all over the world.

But from the oil spill in the Gulf of Mexico, to the Massey Energy mining disaster here in my home state, people have had enough. I can tell you after years of taking my community’s fight right to the West Virginia governor’s office and getting arrested for civil disobedience, though – “having had enough” doesn’t make one bit of difference.

If you’re like me, and you’re sick of the destruction when there are alternatives that won’t destroy God’s creation and people’s homes and ways of life, then stand up and say so — whether you’ve been in this fight for decades or days.

Things are heating up all across America, and they’ll keep heating up as the battle to pass strong climate, clean energy, and jobs legislation intensifies in the coming weeks and months. It’s not going to be an easy fight. And I pray that it will be won by people standing up and speaking their minds, and holding our elected officials accountable to people and communities all over the country, and the world.