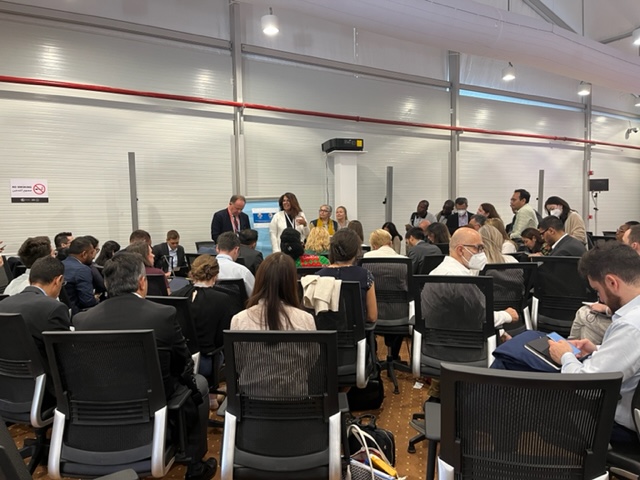 This week at COP was a study in contrast between international policy negotiation and the implementation work of local communities. The US is squarely in the middle of both conversations, a fact US Special Climate Envoy John Kerry highlighted in his morning talk at the opening of the US Climate Center. Kerry emphasized the central role of local communities in implementing the recently passed Inflation Reduction Act, which he described as one of the most significant pieces of US legislation in the past half-century. He also affirmed the need for increased support for loss and damage, but steered clear of any actual pledges of US support.

We interviewed leaders from ICLEI: Local Governments for Sustainability attending the COP from US communities, who gave compelling explanations of the work of local governments and the need for funding to support that work. I was interested in Hawai’ian South Maui County Council Member Kelly King’s description of the tough decisions local officials face in making decisions about economic development in the face of climate change, and the hard conversations they have to have with constituents who want unsustainable real estate or local amenity options.

Council Member King also talked about the commonalities local communities have around the world, and the heartbreak of seeing communities without the resources of Hawaii to adapt to climate change. She pointed out the difference topography makes for the options island nations face: those with mountains can relocate populations, but those that are basically flat will have no choice but to evacuate completely, leaving behind their cultural heritages and lifeways.

Former Santa Monica Mayor Pam O’Connor emphasized that funds for adaptation and mitigation need to flow to local communities where the work actually happens, instead of passing through state governments that may be antagonistic to climate solutions. O’Connor insisted that local officials must be part of the conversation about climate solutions not merely implementers of policies decided by others.

While US local governments often are focused on getting financial support to make their communities more resilient to climate impacts, many national governments at the COP are looking for financial support to survive ongoing climate-driven disasters. Tempers flared in a session on loss and damage, where island nations were unanimous in their demands for new, adequate, loss and damage finance. The session followed a morning “stock-take” discussion on finance that was supposed to be centered on solutions but focused largely on the recitation of problems and grievances.