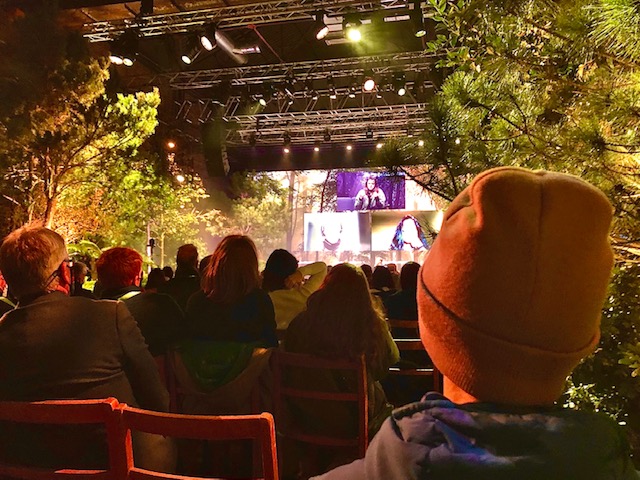 Tuesday, November 2nd, was the green carpet premiere of “Laudato Si’,” a film to be released on Earth Day 2022 – seven years after Pope Francis penned his second encyclical “on care for our common home.”

Rev. Susan Hendershot and I gathered at the New York Times Climate Hub, across the River Clyde from the COP26 venue, to attend the event.

We saw advance clips of the gorgeous, yet disturbing work still under production. And in a rather intimate setting, we met people involved in its creation:

Filmmaker Nicolas Brown shared his reflection on the role of the international faith community: “We cannot solve [the climate crisis] without the message the faith community can deliver … with warmth, heart and compassion.”

FaithInvest’s Martin Palmer observed that we are a people of narratives: “We don’t narrate through data. No one is ever converted by a pie chart; we are converted by stories, by personal experience.”

Dr. Laura Gold noted the utility of data, as did Nicolas Brown. However, they shared that scientists in the film, some of whom were atheists, took their knowledge of climate data into a meeting with Pope Francis to help construct stories, to “move people off the metrics couch … into action.”

Amidst the film’s lament for the loss and destruction to the planet, were stories of hope. These included a story about Buddhist monks ordaining rainforest trees in Cambodian and Thailand to block illegal cutting. (read more about this movement: https://www.bbc.co.uk/news/av/magazine-31650591).

Climate Activist Ridhima Pandey shared her concerns for youth, for all creation. Her meeting with Pope Francis in Rome is recounted in the film.

And, of course, as Father Joshtrom Isaac Kureethadam noted, “Pope Francis opened up the discussion.”  Here for you is the entirety of the 2015 “Encyclical Letter Laudato Si’ of the Holy Father Francis On Care for Our Common Home:”

Be well, but act.