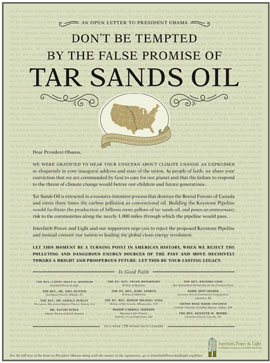 Over 150 clergy from diverse faith traditions and regions have signed a letter to President Obama urging him to reject the Keystone XL oil pipeline on moral grounds.

The letter, published today as a full page ad in Politico, reminds the president of his words in the Inauguration, stating: “As people of faith, we share your conviction that ‘we are commanded by God to care for our planet’ and that the ‘failure to respond to the threat of climate change would betray our children and future generations.'”

The Rev. Cn. Sally G. Bingham of Interfaith Power & Light, who organized the letter, said, “People of all faiths are concerned about the growing danger of climate change. In his Inaugural speech, the president recognized our moral obligation to leave a safe climate for future generations and to care for God’s Creation. Building this pipeline is the exact opposite of the course we must take to safeguard our climate and move towards a clean energy economy.”

The state department is currently reviewing the permit to allow oil giant TransCanada to transport tar sands oil from Canada through six states and to the Gulf Coast for refinement and export.

Interfaith Power & Light is mobilizing a religious response to global warming in houses of worship across America. Our 40 state affiliates reach over 14,000 congregations. We are modeling clean energy solutions in our facilities and advocating for climate protection. 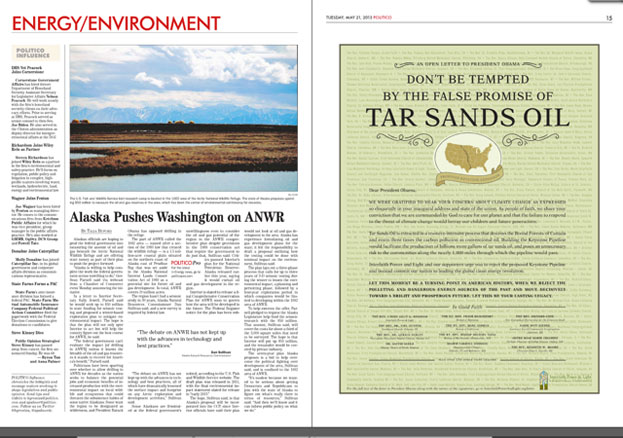 Keystone clergy letter as it appeared in print in Politico on May 21, 2013.