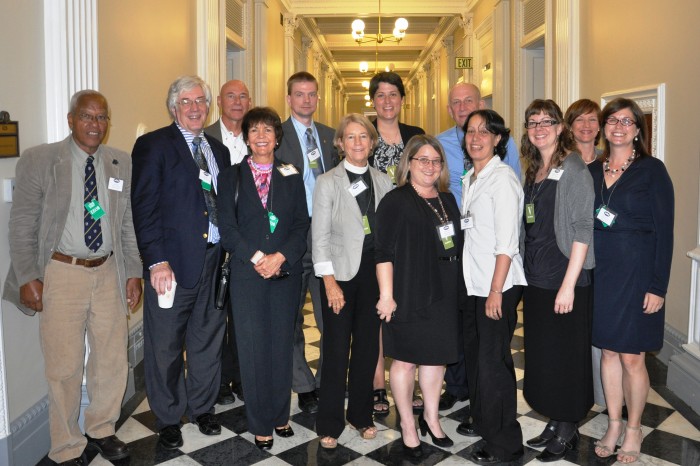 Updates: See below for a link to a Huffington Post commentary about “Greening America’s Congregations.” We’ve also added some of our favorite tweets from the event to the bottom of this post.

Interfaith Power & Light had a robust presence in Washington, D.C., last week, joining faith leaders from across the nation for a discussion of how to increase the energy efficiency of the nation’s houses of worship. “Greening America’s Congregations” took place Thursday, September 13, in partnership with the U.S. Environmental Protection Agency’s (EPA’s) ENERGY STAR program and the White House’s Office for Faith-Based and Neighborhood Partnerships.

According to EPA, if America’s houses of worship cut energy use by 20 percent, collectively they would save nearly $630 million, cut electricity use by more than 3.6 billion kilowatt hours, and prevent more than 2.6 million tons of greenhouse gas emissions, equivalent to the emissions from about 480,000 cars.

“Just a few years ago, this kind of gathering would not have taken place,” Peter Adriance of the National Spiritual Assembly of the BahÃ¡’Ã­s of the U.S., wrote on Huffington Post. “The upsurge in interest in energy savings has not only been driven by a slow economy and scarce resources, but also an awareness of the reality of climate change and its moral implications. This latter issue gave the meeting an even greater sense of urgency for all in the room.”

At the event, the White House issued a “Call to Action” to congregations nationwide, encouraging houses of worship to measure and track their energy use with EPA’s Portfolio Manager tool. After establishing an initial baseline in the tool, houses of worship which improve their energy efficiency by 20 percent or more will be specially recognized by the White House. Any house of worship which then earns a 75 or higher on EPA’s 1-100 energy performance scale, indicating that the building performs better than at least 75 percent of similar buildings nationwide, will be eligible to earn EPA’s ENERGY STAR. Here’s more information about the ENERGY STAR program for congregations.

Interfaith Power & Light is a longtime national leader in the effort to help faith communities cut their energy use, with many resources available through the Cool Congregations program to complement those offered by the EPA. The annual Cool Congregations Challenge is under way this fall. October 18, 2012, is the deadline for congregations to enter in one or more of four categories for a chance to win $1,000, save big on energy costs and serve as a model to other faith communities and civic organizations. Congregational leaders can download a free instant guide at www.coolcongregations.org to get started with project ideas, success stories, a list of 25 things to do that cost less than $25 and complete entry guidelines.

Here are some of our favorite tweets from the “Greening America’s Congregations” event.