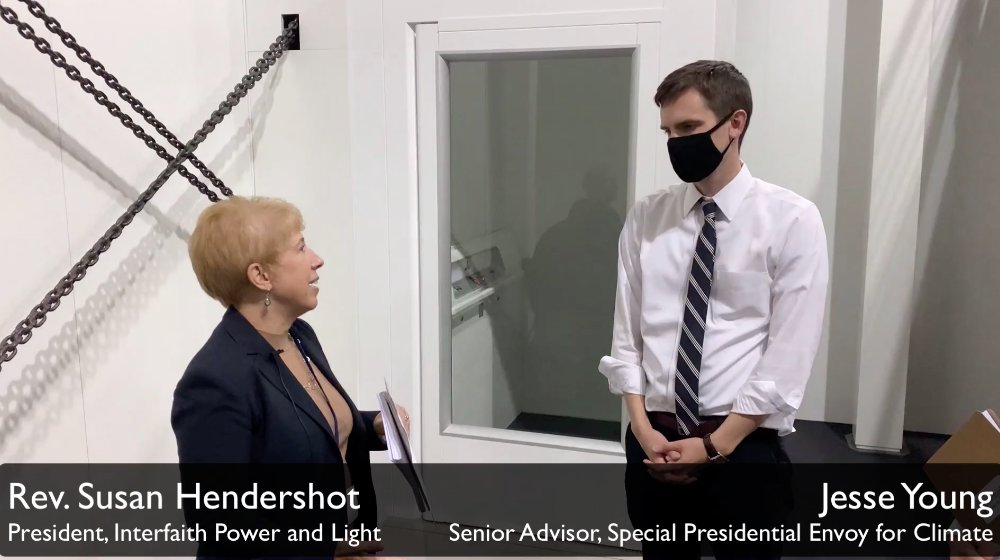 NOV 4, GLASGOW — Today. Interfaith Power & Light’s president, Rev. Susan Hendershot and  Rev. Vy Nguyen, Executive Director of Week of Compassion with the Christian Church (Disciples of Christ), presented a letter to Jesse Young, special assistant to Climate Envoy John Kerry, calling for U.S. leadership on increased climate commitments at the COP. The petition, signed by 5,000+ people of faith in the U.S., includes hundreds of clergy and other faith leaders. It is an example of the increasing advocacy by people of faith for bold climate action.

“People of faith and spirituality have been on the frontlines of the climate crisis for decades, as climate emergencies have claimed the lives and livelihoods of people in their communities and their global partners.

In addition to setting ambitious goals to reduce our own country’s carbon pollution, we must support the rest of the world to do the same, and that means financing to help the developing world adapt and transition to sustainable clean energy. As the world’s wealthiest nation and largest historical emitter, we have a moral obligation to support communities suffering the most from a changing climate,” said Rev. Hendershot.

In the petition, faith signers write:

“We now ask the U.S. government to make the following commitments and advance these priorities during the COP26 negotiations:

•Accelerate Ambition. We urge the U.S. to accelerate ambition and reduce carbon emissions to keep global warming to no more than 1.5C degrees above pre-industrial levels.

•Increase Climate Finance Commitments. We urge the U.S. to pay its fair share of the $100 billion commitment to climate finance through the Green Climate Fund and other finance mechanisms by increasing its commitments by 2025.

•Increase Support for Loss and Damage. We urge the U.S. to prioritize commitments to the most vulnerable populations, such as Indigenous peoples, small island nations, least developed countries, and climate migrants.

•Include Climate and Ecojustice in Adaptation and Mitigation. We urge the U.S. to include climate justice and reject environmental racism in adaptation and mitigation efforts, as well as ensuring a just transition for fossil-fuel workers. We also urge the U.S. to ensure protection of human rights, especially for Indigenous and local communities.”

Rev. Nguyen, a co-signer of the petition and IPL national board member, joined in the presentation. He stated: “As a person of faith we are called to care for all of Creation, especially for the most vulnerable communities all over the world whose livelihood is impacted by climate change.  The sacred water that nourishes them has been polluted. The forests of their ancestors have been cut down. Creation is hurting, and it affects not just these communities, but all of us.  Now, more than ever, is the time for the United States to step up and work to restore Creation.”

Interfaith Power & Light is a national nonprofit organization with 40 state affiliates and 22,000 congregations in all 50 states. IPL inspires and mobilizes people of faith and conscience to take bold and just action on climate change.