Our Interfaith Power & Light state affiliates have received some high-profile news coverage lately, including these stories: 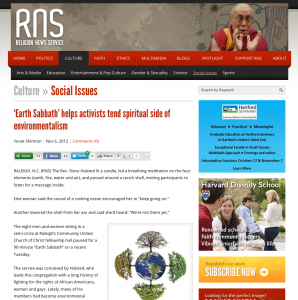 The Earth Sabbath services offered by North Carolina Interfaith Power & Light were featured in a November 6 Religion News Service story (also published in the Washington Post). “Earth Sabbath celebrations are now held in a handful of North Carolina cities, including Chapel Hill, Durham and Asheville. Their purpose is to “salve and energize” the spiritual lives of environmental activists and others who grieve for the damage to the earth and its resources,” wrote Yonat Shimron. “The destruction left in the wake of Hurricane Sandy might awaken more religious congregations to the realities and dangers of climate change. But while many are already swapping incandescent light bulbs for compact fluorescents, eliminating foam and plastic coffee cups, planting gardens and installing solar panels, few have paid attention to the spiritual dimensions of this work.” Upcoming services are listed at the North Carolina IPL website.

Humility and love for God’s Creation drive the work of Utah Interfaith Power & Light, according to a November 2 article by Joseph Walker in the Deseret News. Walker wrote about how diverse faith groups including Mormons, Methodists, and Unitarian Universalists practice good stewardship by reducing their congregational carbon footprints and encouraging individuals to take action, too. His article includes quotes from Utah faith leaders as well as The Rev. Canon Sally G. Bingham, founder and president of The Regeneration Project and its Interfaith Power & Light campaign. Read more.

Michigan News Connection, a division of Public News Service, did several stories on Michigan Interfaith Power & Light‘s work on the recent Proposal 3 campaign to boost the state’s renewable energy standard. Although the measure was defeated at the ballot box after big utilities and the fossil-fuel industry outspent supporters two-to-one, Michigan IPL did outstanding work mobilizing the faith community. Read “Voter mobilization efforts step up the pace for clean energy,” “A military leader and a pastor join forces for Prop 3,” and “Renewable energy: For some in Michigan, it’s a matter of faith.” Michigan IPL’s work was also highlighted at The Daily Climate.