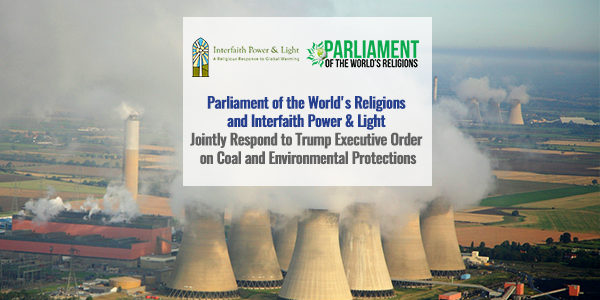 SAN FRANCISCO and CHICAGO (March 30, 2017) — President Donald Trump’s actions this week to reverse the steady progress being made in confronting the challenge of climate change are not only alarming and dangerous; these actions are immoral.

“Religious and spiritual communities and people of conscience across the earth must commit themselves to work together to stand against the President’s irresponsible and unethical actions…actions that threaten human beings everywhere, that endanger living beings across the globe, that put the earth at peril,” argues Dr. Larry Greenfield, Executive Director of the Parliament of the World’s Religions.

Interfaith Power & Light and The Parliament of the World’s Religions have joined together to express deep concern over the Trump Administration’s deceptively-titled Executive Order on “Energy Independence and Economic Growth,” and join with people of faith and conscience within the United States and across the world to protest the President’s actions.

Based on a flawed understanding of both economics and science, the President’s action compromises Americans health and safety, damages our economy in both the short and long term, and undermines our children’s future wellbeing and security.

The Executive Order blatantly and callously plays on real fears and economic pain while it puts the benefit of a few of the richest Americans ahead of the needs and rights of the vast majority and offers no real solutions or help to those in economic distress.  Its purported “benefits” are ephemeral, exaggerated or nonexistent.

The Clean Power Plan that the President wants to reverse and rollback has important provisions to move the United States toward reliable, affordable and renewable energy and energy efficiency, while preventing as many as 3,000 premature deaths and almost 100,000 asthma attacks per year by 2030. The CPP is helping to bring the benefits of clean energy, like good jobs and lower energy bills to consumers in every community. This carefully crafted plan, which is now in jeopardy, had the input of millions of Americans through the public comment process, and it has support from industry leaders.

The other elements of the President’s Executive Order are as pernicious as dismantling the Clean Power Plan. The sweeping order attempts to undo methane standards for oil and gas operations, stop federal agencies from considering the imminent and demonstrable impact of climate change in their decisions, and opens up federal lands for coal mining and fracking.

The cumulative impact of this Executive Order will harm the economy, reduce jobs, endanger the health and safety of communities, take decision-making away from states and communities, and lead to wasteful spending of federal funds, internationally and domestically.

Its promises are false, but the damage it will cause will be very real.

This issue goes to the heart of our spiritual values and our call to promote justice, protect life, and to be good stewards of Creation. Over the past decade, important progress has been made: Federal actions have helped curb pollution from power plants, raised mileage standards and made our cars more fuel efficient and helped communities avoid impacts of climate change. We have much more to do, and we should be building on our progress, not rolling them back.

Global warming threatens the Earth and disproportionately harms the most vulnerable among us. That’s why climate change is a common factor in all environmental justice issues, and an urgent priority for people of faith. Although it affects everyone, poor and vulnerable communities that contributed least to creating this problem bear the brunt of its impacts. From devastating drought in sub-Saharan Africa to powerful storms that wipe out coastal communities, to deadly air pollution, it’s the poor who suffer “first and worst.”

Faith communities will fight these reactionary measures every step of the way. We will use energy efficiently, install renewable energy on our facilities, and build climate resilient communities. We will support those most in need and those who bear the brunt of climate impacts, and encourage and help those most responsible for climate change to increase their efforts.

The choices we make today will shape the world in which our children will live. We have a responsibility to ensure that those choices are guided by our values as people of faith.

The Reverend Canon Sally Bingham, President of Interfaith Power & Light concludes, “This executive order is shocking to anyone who cares about future generations and the right to breathe clean air.  We have struggled for many years to secure a healthy and safe future for our children and grandchildren by responding to the urgent threat of climate change.  For anyone who believes in God and believes that God put us here to look after the garden, stewarding Creation is a moral imperative.  All of the world’s great religions teach that caring for our Earth is a responsibility, and that we must serve the poor and vulnerable. It is a sin to knowingly harm Creation and endanger our air and water.  Is this what our president intends to do— sin against God? This is a shameful day in our country’s history.”

Larry Greenfield is the Executive Director of the Parliament of the World’s Religions. He was recently executive minister of the American Baptist Churches of Metro Chicago, a regional judicatory of the American Baptist Churches U.S.A, and the theologian-in-residence for the Community Renewal Society, a progressive, faith-based organization in Chicago that works to eliminate race and class barriers and advocates for social and economic justice. He received his Ph.D. from the University of Chicago Divinity School, where he subsequently taught and served as dean of students. Later he served as president of Colgate Rochester Divinity School in Rochester, New York.

The mission of Interfaith Power & Light is to be faithful stewards of Creation by responding to global warming through the promotion of energy conservation, energy efficiency, and renewable energy. This campaign intends to protect the earth’s ecosystems, safeguard the health of all Creation, and ensure sufficient, sustainable energy for all. IPL has been helping congregations address global warming by being better stewards of energy. The campaign has a track record of tangible results: shrinking carbon footprints and educating hundreds of thousands of people in the pews about the important role of people of faith in addressing this most challenging issue. Interfaith Power & Light effort began in 1998 with Episcopal Power & Light and the support of Grace Cathedral as a unique coalition of Episcopal churches aggregated to purchase renewable energy. In 2000, this Episcopal effort broadened its focus, brought in other faith partners, and California Interfaith Power & Light was born. California IPL developed a successful organizational model that engaged hundreds of congregations, educated thousands of people of faith about the moral and ethical mandate to address global warming, and helped pass California’s landmark climate and clean energy laws. Building on California’s success, this model has now been adopted by 40 state affiliates, and we are working to establish Interfaith Power & Light programs in every state.

The Reverend Canon Sally Grover Bingham, an Episcopal priest and Canon for the Environment in the Diocese of California, was one of the first faith leaders to fully recognize the changing climate as a moral issue. She is founder and president of The Regeneration Project and its Interfaith Power & Light campaign, which currently has 18,000 congregation members in forty states. Rev. Bingham serves on the national board of the Environmental Defense Fund, and the advisory board of both the Union of Concerned Scientists and Climate One. She has received many awards including in 2012, the Rachel Carson Women in Conservation Award from the Audubon Society and the Life Time Achievement Award from the Festival of Faiths and in 2014, the Bishop of California Green Cross Award.  Rev. Bingham is the lead author of Love God Heal Earth, a collection of 21 essays on environmental stewardship by religious leaders, published by St. Lynn’s Press.