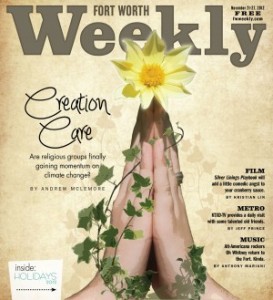 There was a moment, Melissa Ashmore is sure of it, when the officials from the Environmental Protection Agency started paying attention. It was the moment she began talking about Jesus.
The Environmental Protection Agency had come to Arlington city council chambers for a single day this summer to hear what the locals thought about rolling back clean-air standards for the cement industry, which belches out asthma-inducing pollutants carried by prevailing winds across North Texas.

Hours of testimony from other environmentalists preceded her, and Ashmore agreed with them. There was a lot of table-pounding and shouting from the 80 or so activists who showed up, but the EPA panel and state regulators didn’t even look at most of them.

When Ashmore, a member of Fort Worth’s First Congregational Church, took her turn behind the microphone at a small table, she used the kind of language that — at least in a secular setting like this one — turns more heads than four-letter words would.

“I was trying to articulate the way that I saw the call to care for the environment and for other people,” Ashmore said. “For me, leading a good Christian life is not just about giving money to charity and feeding the poor but also protecting others from harm in the same way that I would protect my own family. It was about how the Creator called us to protect others.”