The Interfaith Power & Light National Preach-In on Global Warming was a major success this year. President Obama is now receiving thousands of our postcards and petitions asking him to follow up on his inaugural promises to make climate action a priority. The show of support and call for action from the faith community could not come at a more important moment, as a decision from the Administration is expected on whether or not to approve permitting of the Keystone XL pipeline.

On Sunday, February 17, an estimate 40,000 Americans gathered in Washington, D.C., to protest against approval of the pipeline as part of the largest climate rally to date. Thousands more demonstrated in Chicago, Los Angeles, San Francisco, Seattle and other U.S. cities. It is believed by key climate experts, such as NASA scientist James Hansen, that refining and burning Canada’s tar sands oil globally will mean “game over for the climate.”

Why we marched, by Delaware Interfaith Power & Light

Faith groups add their voices to the forward on climate chorus, The Progress

Keystone Pipeline will be stopped by a miracle, Rose Marie Berger

The Hawaii-IPL homepage (www.hipl.org) has links to a transcript and video of the sermon given by Dr. Kati Corlew, research fellow at the East-West Center, on climate justice, faith, and action, as part of a Preach-In for the Planet event. Kati has research experience in Tuvalu, one of the Pacific Islands likely to be completely inundated with predicted sea level rise in the next few decades.

Washington Interfaith Power & Light wasn’t able to be part of the event in DC, but in addition to participating in a local event here in Seattle, they were featured on a blog focusing on people “doing good”, and it mentions the DC event as well as our local climate and energy efforts. 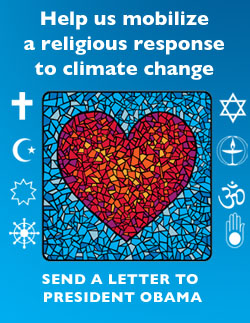 If you didn’t get a chance to send in a postcard, please use this online petition to send a letter to President Obama now. We must make our voices heard. While climate change is occurring rapidly, political change comes slowly in Washington.

Thank you for turning up the volume so President Obama hears the faith community’s urgent call for action on global warming.