Today Interfaith Power & Light released a letter to President Biden signed by 1,000+ people of faith, including hundreds of clergy and other faith leaders, calling for increased U.S. ambition on climate. The letter also highlighted efforts by congregations to reduce emissions substantially, including three that are zero carbon.

At the U.N. climate conference later this year, other nations will want to see what the world’s largest historic polluter has done since we exited the accord, and what we will pledge to do as we rejoin. Internationally, the fact is current pledges are not sufficient to keep global warming to 1.5 degree Celsius — or even under 2 degrees, the upper limit of the Paris accord. A strong and credible commitment from the U.S. will encourage other countries to step up their own ambition.

“Interfaith Power & Light and our network of 22,000 congregations around the country are grateful that President Biden listened to people of faith and conscience and followed through with his promise to rejoin the Paris Climate Accord on his first day in office,” said Rev. Susan Hendershot, president of Interfaith Power & Light, “but this is only the very beginning of what we need to do to get the U.S. and world on track to a truly sustainable future.”

The letter reads in part: “Later this year, at the U.N. climate conference in Glasgow, I urge you to make a U.S. commitment that goes beyond the Paris agreement. For the sake of our children’s future and all of Creation, we must achieve at least 50% reductions by 2030 and a 100% clean energy future by 2050, while supporting developing nations.”

The good news is that the U.S has already begun working toward those goals. While the previous administration was rolling back climate protections, Americans were continuing to reduce emissions in our houses of worship, homes, schools, and other institutions. Some have cut their emissions by half or more already.

“The next step is setting ambitious goals and demonstrating real commitment to reduce our country’s carbon pollution, along with support to help the developing world adapt and transition to sustainable clean energy. As the world’s wealthiest nation and largest historical emitter, we have a moral obligation to support communities suffering the most from a changing climate,” said Rev. Hendershot.

People of faith and conscience view the climate crisis as one of the defining moral issues of our time. A recent poll commissioned by Interfaith Power & Light found that almost three-quarters (73%) of voters say they are worried about climate change, including 87% of Black Protestants, 82% of nonwhite Catholics, 77% of white Catholics, 76% of Jews, and 57% of white evangelical Protestants.

More than 8 in 10 of these faith voters see their responsibility to care for God’s creation as a reason to act on the climate crisis. Our country should follow the example of these zero carbon faith institutions, and make a stronger commitment on climate, by reducing our own emissions at home and helping developing nations to rapidly shift to clean energy.

These three congregational signers of the letter are already cutting emissions to zero or near-zero:

Church of Our Saviour in Arlington, Massachusetts

The rectory of this small church is now saving 15 tons CO2 per year with new heat pumps, with of total savings $1,710 in annual energy costs. Read their story here 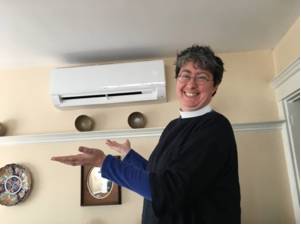 They have built the greenest church in Iowa, a LEED certified, Net-Zero building with geothermal, solar, and electric car charging stations. Read their story here 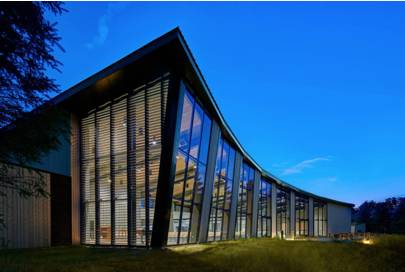 The Church of St. Martin in Davis, California

This “Cool Congregation” is certified at 100% reduction as a net-zero congregation! Read more here. 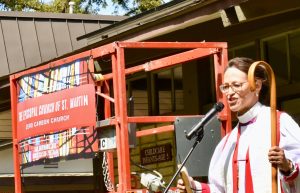 The Rev. Megan M. Traquair, bishop of the Diocese of Northern California for the Episcopal Church, blessing the solar panels at St. Martin’s (Photo by Johan Verink).

To learn more or to get a copy of the letter to President Biden, email Susan Stephenson at susan@interfaithpowerandlight.org