COP 27 – Together for Implementation on Loss and Damage 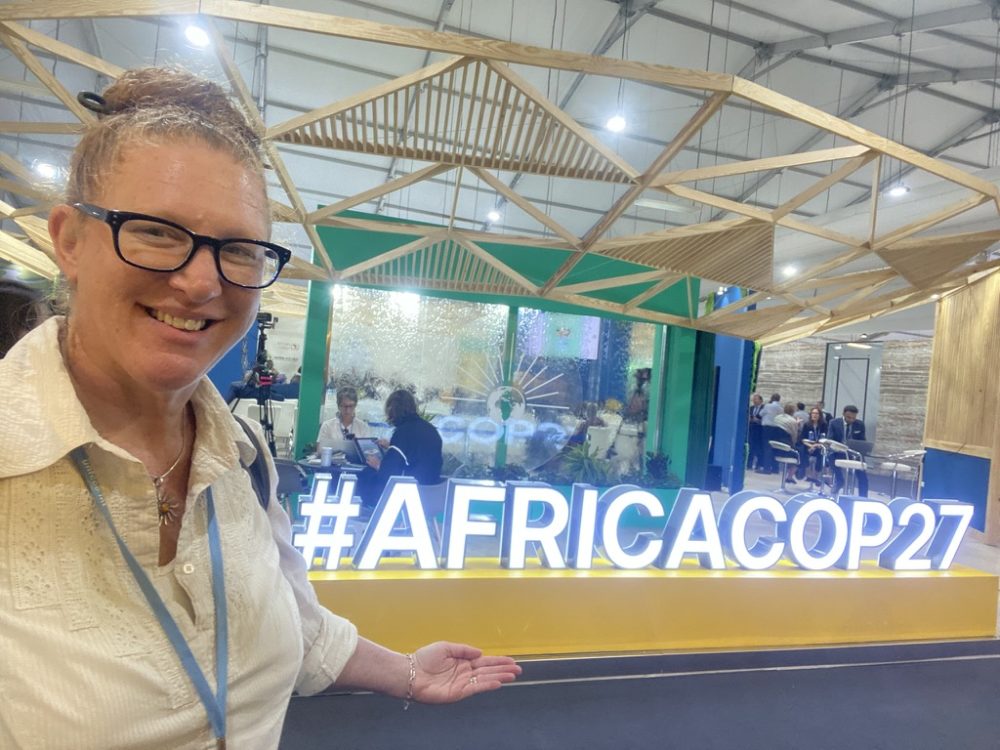 As you have hopefully heard in the news, the 27th Conference of the Parties of the United Nations Framework Convention on Climate Change (COP 27) is currently taking place in Egypt. The theme for COP 27 is #TogetherForImplementation. Of the many years of global meetings that have taken place since the 2015 Paris Agreement, this “implementation summit” of 2022 is the year nations are expected to demonstrate that they are in a new era of implementation by turning their commitments into action. Walking through the maze of the COP 27 campus you can see the branded theme everywhere from massive banners and big screens to the plant-based paperboard water bottles handed out daily to participants.

The general view of COP 27 is to build on previous successes and pave the way for future ambition to effectively tackle the global challenge of climate change. We recall that the main aim of the Paris Agreement is to keep the global average temperature rise this century as close as possible to 1.5 degrees Celsius above pre-industrial levels. Every minute that we delay implementation of real action we see that number rise and so we know we must move beyond the “talk” of negotiations into the commitments of climate finance in very real and equitable terms. That said, the discussions around the creation of a loss and damage (L&D) financial facility are of highest importance at COP 27.

Last week, Bobby Watson wrote a Texas Impact blog on L&D  highlighting some of the overall tensions around the issue. This week, along with many others from American Civil Society, I attended a meeting with Senator Schumer’s staff to discuss how they might help us move this critical issue forward. We discussed our concerns that although US climate envoy, John Kerry, has said his country was “totally supportive” of moves to address loss and damage and is “100% ready” to discuss the issue in detail, the U.S. State Department has not yet agreed to support the creation of a L&D financial facility. Directly after the meeting with Schumer’s team a group of us headed over to the Climate Justice Pavillion to hear more about the demands for the L&D finance facility from a panel moderated by Manish Bapna, President and CEO of Natural Resources Defense Council (NRDC).

Because we are well aware of the political challenges of allocating funds via U.S. Congress for climate action, we should be willing to listen to those in the negotiation space representing our country and hear their hesitations to make promises to developing countries that they do not feel confident they can deliver in the form of finances.  However, this is no excuse to be an obstacle by blocking the rest of the world’s ability to move forward in creating this L&D financial facility which is so desperately needed.

Today, in support of the letter House Democrats sent to President Biden, a press release was distributed globally titled: US & Global Activists call on the United States to Stop Blocking a Loss & Damage Fund which includes quotes from our colleagues that we are working with in Sharm El-Sheikh, amplifying the call for a L&D financial facility.

It is becoming more clear by the day that if the implementation launch of a loss and damage facility at COP 27 does not take place this will be a huge loss for humanitarian empathy. This is exactly where I turn to my faith and prayerful hope that it will happen in time, it just has to.

PRAYER:
During these last days in Egypt, may the U.S. delegation let go of all inhibiting and paralyzing fear to be guided by the moral compass of compassion in the name of justice for all God’s children. We are all in this #TogetherForImplementation!