Well-respected physicist Richard Muller of UC Berkeley was once touted by climate change skeptics as a bona fide climate scientist who shared their mistrust of the data on global warming. Then, he did his own exhaustive study of the data from the nearly 40,000 weather monitoring stations around the world and found that the results largely concurred with the earlier findings of significant warming over the past 300 years. And he explained his findings very clearly when he was called to testify before a Congressional Committee investigating the matter. Now Dr. Muller advocates for policy change to curb emissions — as long as those policy solutions are big enough to address the problem on a global scale.

Dr. Muller says: “I believe that global warming is an important issue that should be looked at very seriously by policymakers. The research shows without a doubt that significant warming has already taken place, much of it due to human activity. The good news is that we have time to address the problem. But we need to be smart about solutions too, and avoid risky experiments like geo-engineering that could waste time and money and actually do harm. The only real solutions must be large scale and need to take carbon dioxide out of the air. For example, converting all of China’s coal plants to natural gas.”

Although he advocates for very large scale solutions that require policy change, Dr. Muller believes individuals can still make a difference in leading by example, which makes them better advocates. “I think houses of worship are a great place to model energy efficiency, especially if it convinces parishioners to talk to their legislators about policy change.”

Seeing the photos of animals mired in the muck of the Gulf disaster and hearing the stories of people who have lost their livelihoods, I’m reminded that nothing occurs in a vacuum.

As a Franciscan priest who has been honored to meet people in travels around the world, I used to think most of us didn’t realize what a high price we paid for ignoring the connectedness of all creation.

I still believe this is true – but I think awareness of that price is growing as we witness the devastation in the Gulf of Mexico.

In this unfolding disaster, our economy suffers as the earth suffers. Our spirits suffer as the natural world around us struggles under the weight of our neglect. As all of us awaken to the reality of the critical need to address climate change, we have a choice: We can continue to wield that power and defile our natural world or we can say together, “No more.”

Those of us who understand that climate destruction and unsustainable practices are moral issues must seize this chance to urge our elected officials to pass strong climate legislation.

We are, all of us, connected. When you stand up for the care of this world that we’re so incredibly lucky to share, stand firm. Your action for creation is an action for all of us – Christian, Jew, Muslim, Hindu, Buddhist, and all of creation.

There is a change upon us. Will that change fully realize our potential for living in a way that honors God’s gift to us? The answer depends on us. Thank you for standing up for creation.

That means I believe in human-induced climate change, and as a person of faith, I know that it’s my duty to do something about it. Back when I was the vice president of the National Association of Evangelicals, I stressed climate change as a moral issue. And although it didn’t always make me popular, I knew it was the right thing to do.

I had an epiphany in 2002, when I attended a conference with leading scientists and biblical scholars presenting their findings on climate change. I realized that global warming is a real, human-caused problem, and that rising sea levels, pollution, and deforestation are already irreparably damaging some of the world’s most vulnerable communities. And I knew I had to do something about it. It’s right there in Genesis – people of faith are given the duty of tending and protecting the earth.

I know that being outspoken about protecting the environment isn’t always easy. Many people are afraid to bring it up, even with close friends and family. But as people of faith, as people who are committed to protecting all that God created and called good, it’s our job to lead the way in our communities and to hold our leaders and each other accountable.

In order to fight climate change, people of faith need to unite and work to change society. Everything from scripture to history books tells us that transformations like this don’t come from above – change comes from regular people, like you and me, speaking up about tough issues and making efforts in our everyday lives.

Since becoming a Climate Convert I’ve changed the way I do some things. First, I switched to a hybrid car. And composting isn’t optional in our home – it’s a commitment our family has made to live out our faith and make a difference in the world, starting right in our own backyard. Maybe you’ve also begun doing some things differently over the years. If you haven’t, I hope you’ll consider it. Whether it’s recycling, driving less, or eating more food that’s grown nearby – there are a lot of simple things you can do, and every little bit counts when we act together. 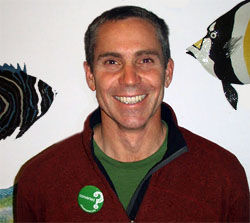 My name is Steve Schmidt, and I’m a Climate Convert.

As a well-traveled mechanical engineer, I have lots of respect for the scale of our earth: the continents and oceans; vast forests and mountain ranges; incredibly powerful events like hurricanes and volcanoes. The immensity of our natural surroundings can make us feel small and insignificant. So for many years I was highly skeptical that our coal plants could make an impact on a truly global scale.

But during the years I was in denial of human-induced climate change, I slowly realized two things. First, I didn’t really know the science at all – I was relying on my intuition and believing the people who lined up with it. Second, most of the smart people I knew or read about who really did know the science were becoming very worried.

I’m smart enough to know that I can be wrong. So beginning around 2004 I started reading about “global warming” and “CO2 trends from Mauna Loa” and “Hubbert’s peak oil theory” and “temperature records from ice cores and brain coral” and “ocean acidification”. It was the ocean acidification that got me.

I’m a scuba diver, and have been lucky enough to dive in some incredibly beautiful areas such as the Caymans, Belize, Australia’s Great Barrier Reef, Martinique, and the Bahamas. The data is very clear regarding how increasing CO2 effects the oceans, and coral reefs in particular. There is very little debate about it. Coral reefs around the world are dying, and some expert believe our grandchildren may grow up in a world where the only thriving reefs are in aquariums. Just the possibility this might be true was enough for me.

Since then I’ve become more and more involved in climate change, volunteering to develop our town’s first greenhouse gas inventory and more recently starting a new career in the “clean tech” industry. I also spend a lot of time discussing these issues with good friends who are still skeptical. I bring up coral reefs pretty frequently, and occasionally they do the trick.

Like many conservatives, I was traditionally skeptical of the science supporting anthropogenic global warming. Today, I am skeptical no longer. Like conservative blogger D.R. Tucker, on this issue, I was ultimately “defeated by facts.”

According to Tucker’s article “Confessions of a Climate Change Convert” on FrumForum, reading the 2007 Fourth Assessment Report of the Intergovernmental Panel on Climate Change was the critical moment in his conversion process. In my own case, I finally reached a point where I could no longer in good conscience deny the implications of the cumulative weight of so large a corpus of evidence.

That body of evidence is extensive, and growing. For example, in 2010 the National Academy of Sciences issued what its president, Ralph J. Cicerone, deemed “the most comprehensive report ever on climate change.” The report echoes many of the same findings as the earlier 2007 IPCC report that played a key roll in Tucker’s conversion but includes five additional years’ worth of evidence and data. And in 2010, the Pentagon identified climate change as a threat to our nation’s security in its Quadrennial Defense Review for the first time.

As a practicing Roman Catholic, another critical element for me was the leading role being played by Pope Benedict XVI and the Catholic Church in articulating the moral imperative to address manmade global warming. For example, in May a working group at the Pontifical Academy of Sciences issued a declaration calling on all people of good will “to recognize the serious and potentially irreversible impacts of global warming caused by the anthropogenic emissions of greenhouse gases and other pollutants, and by changes in forests, wetlands, grasslands, and other land uses.”

In the end, my own reading and research made the following conclusions inescapable: today, there is no debate in the scientific community about whether the Earth is warming – it is. There is also a nearly unanimous consensus that human activity is responsible for this warming.

Given the foregoing, addressing climate change today is an ethical and moral imperative. Failing to do so is a repudiation of our responsibilities both to each other, and most particularly, to future generations. It is a breach of faith, trust, and duty, of enormous magnitude.

Regrettably, while the case for manmade global warming has become increasingly more persuasive over the past several years, and the need for immediate action ever more apparent, public opinion in the United States has been trending in the opposite direction.

The scientific evidence, however, cannot be wished away. Today, we must work with renewed vigor to better educate the public on the threat posed by AGW, and to build support for policies designed to eliminate or mitigate it, while there is still time.

Michael Stafford is a former Republican Party officer and the author of “An Upward Calling.”