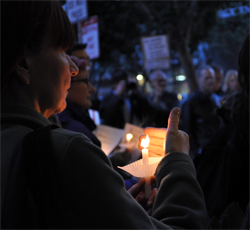 March 7, 2012 — (San Franicsco, Washington, DC; London, UK; Ottawa, Canada; Brussels, Belgium) Citizens and Faith Leaders gathered outside the Canadian consulate in downtown San Francisco, holding candles in a solemn action to call on the Canadian government to be a good steward of the environment. This was done in conjunction with similar actions at more than 20 Canadian diplomatic missions in the U.S. and European Union. Individuals voiced concerns and hopes that Canada will reverse its international lobbying on behalf of highly destructive and polluting tar sands oil industry. The vigils were held in conjunction with a new report documenting the Canadian government’s aggressive lobbying to promote tar sand and stop international climate action.

“Hundreds gathered at Canadian foreign missions to offer a prayer for peoples of all nations to remember that the land belongs to the future and is not ours to destroy,” said The Reverend Canon Sally G. Bingham, Interfaith Power & Light’s President. “We are concerned for our Earth, for she has a fever that will only be made worse by burning tar sands from Canada. We pray that people all over the world awaken to monumental climate-threats posed by the extraction and burning of tar sands oil.”

Michael Marx, the National Coordinator of the Sierra Club’s Beyond Oil Campaign, spoke about the dangers of Tar Sands extraction on the ecology of the Boreal Forest, the North American fresh water supply, and impacts on fisheries. He explained that the pollution of these resources is leading to increased cancer rates and will accelerate the global climate crisis.

The Reverend Justin R., Cannon of the The Episcopal Diocese of California and a member of Interfaith Power & Light, lead an interfaith vigil prayer.

“It feels strange to be protesting Canada, which is traditionally thought of as a strong environmental steward,” said Elijah Zarlin, Campaign Manager, CREDO Action. “Yet the Canadian Government is charging ahead with the astounding devastation of tar sands mining, and efforts like the Keystone XL pipeline, which would allow this oil to be mined and burned even faster, leading to catastrophic climate change. Canada must end this irresponsible practice.”

The Reverend Justin R., Cannon of the The Episcopal Diocese of California and a member of Interfaith Power & Light, lead an interfaith vigil prayer.