Be Another Person of Faith for Clean Air 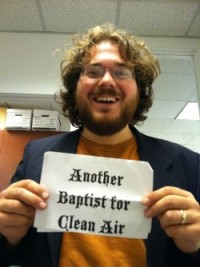 The air that you are breathing is truly the fundamental element for life on this planet. It is needed by every living thing, human and non-human. It is a generational compact – the oxygen molecules we breathe today are the same ones breathed by our grandparents, and their grandparents. It is also what Jesus, the Buddha, Moses, and Mohammed breathed.

Take action to protect the air we breathe.

All faith traditions recognize the life-giving quality of breath. When we sit to meditate, the first thing we do is breathe.

But what if that air is unhealthy? What if it enters your lungs accompanied by toxins that are harmful to your body? Pollution has no political, cultural, or geographical boundaries. It is passed on from generation to generation. Much of the carbon dioxide released during the industrial revolution is still in the atmosphere today. What we emit today will last one hundred years. Take action urging President Obama to lead on this issue.

We know what air pollution does to the body, and what it’s doing to the entire communion of life. The EPA has historically reduced emissions and protected us from harmful air pollutants like mercury, soot and ozone. The new proposed safeguards will save thousands of lives per year and prevent millions of pounds of carbon pollution.

But polluters tell us that having clean air will hurt the economy. That’s just nonsense. Controlling pollution will spur innovation and create jobs in retrofitting power plants and reducing waste. But their legions of lobbyists are pressuring the Obama administration to block the new safeguards and disregard the mandates of the Clean Air Act.

Let’s make sure the Obama administration hears from people of faith. That means us. And we need your help – not as Democrats or Republicans, but as Protestants, Catholics, Jews, Muslims, BahÃ¡’Ã­s, Hindus and Buddhists.

Because if we don’t speak up, others will try to speak for us, even attempting to put a faith mantle on the arguments of the polluting industry. Yesterday, I read remarks from a leader of the Southern Baptist Convention calling the EPA’s proposed safeguards “foolhardy” and claiming, without any evidence, that they “would adversely affect every man, woman and child through job losses and higher costs for energy.” This kind of statement is not only misleading, but misrepresents the faith community as being more concerned about polluter profits than human health.

So, what I’m asking you to do today is simple. Stand with us. Be counted. Tell President Obama you are another person of faith for clean air.