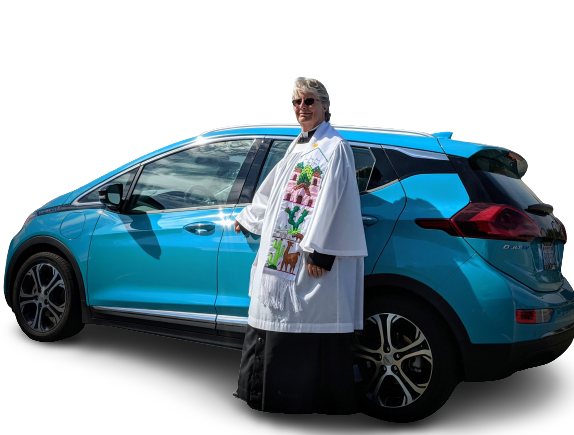 IPL recently launched a campaign to hold automakers accountable for supporting a rapid shift to electric vehicles. The automakers have given us catchy slogans, slick super bowl commercials and promises for the future. What we want are clear results in the form of widely available affordable and reliable electric vehicles. We also need the automakers to advocate for smart climate policies that will provide the clean electricity and charging structure to support these vehicles. And we need them to consider an equitable transition so that the jobs, the charging stations and the vehicles are available to all. We’re focused on this effort because transportation, including vehicles, is the #1 source of climate pollution in the United States.

We’re focused on the automakers, in particular Toyota and GM (which includes the brands Chevrolet, GMC, Buick, Cadillac), because they have historically been slow adopters and we need them to be leaders. Inside EV pointed out late last year that “GM announced that it would release ‘at least 20 new EVs by 2023.’ More recently, we heard that ‘GM is on its way to an all-electric future, with a commitment to 30 new global electric vehicles by 2025.’ How many EVs does GM have on sale in the US (two years from the first announced deadline)? Well, none right now, as the Bolt is temporarily out of production. The automaker is expected to have a new EV on sale very soon—the GMC Hummer, the least efficient EV ever built.” Advertising that you will be adding more electric vehicles and then always pushing the delivery date out further is not helpful – it’s what we call greenwashing.

Toyota is even worse. The maker of the Prius currently has no electric vehicles for sale in the US and has announced plans for one. They have also recently lobbied against a tax credit that would give consumers a $4,500 tax rebate for buying an electric vehicle made by U.S. union automakers. They invested early in hydrogen vehicle technology and stubbornly refuse to acknowledge and support the rapid rise of electric vehicles.

Part of the work to be done is in moving federal policy. And there the automakers can choose to be outspoken champions in support of the very policies that can help them sell electric vehicles or they can wait for the political winds to blow and choose what is most immediately expedient to them. It’s clear what good public policy can do. Norway, with significant taxes on fossil fuel vehicles to better factor in their cost to public health and the environment, had 65% of new car sales going to electric vehicles in 2021. This is compared to about 3% of new cars being electric in the US.

As we advocate in support of a rapid transition to electric vehicles, some people have expressed concerns. Misinformation and misunderstanding are rampant. We’ll continue to counter the myths and misinformation with credible information on electric vehicles. Yet, we need to also acknowledge and address the credible concerns about the minerals and rare earth elements that we’ll need to produce batteries and other components of electric vehicles and the need to fully recycle these products. There are credible concerns about moving our electric generation to 100% clean energy to power the vehicles, building out the charging stations and other infrastructure.

Progress on all of these things needs to be happening in tandem with the development and production of electric vehicles. There is no doubt that this will be challenging, but it’s entirely achievable. This is all the more reason the automakers need to be speaking up for thoughtful and innovative federal policies that focus on climate, jobs and justice. A funny super bowl commercial about your intentions for electric vehicles is nice, but standing beside IPL and other organizations advocating for transformative federal climate policy is far better.

We also will continue to support the policy changes that will make cars less necessary. We will continue to advocate for excellent public transportation, walking and biking infrastructure and walkable communities. There are real health benefits to those changes and for everyone who is driving it means less traffic. But with approximately 280 million vehicles in the U.S. and with a typical passenger vehicle emitting around 4.6 metric tons of carbon dioxide every year, we must focus on moving away from fossil fuel powered vehicles. It’s worth repeating, transportation is the #1 source of climate pollution in the United States.

Moving to electric vehicles powered by clean, renewable energy not only reduces climate pollution, it protects public health. A recent report by the American Lung Association shows that if our cars and trucks are electric by 2035 and heavy trucks by 2040, the U.S. can avoid up to 110,000 deaths, 2.79 million asthma attacks and over 13 million lost work days.

So we hope you’ll join us in the campaign calling on Toyota and GM to set clear targets that 100% of all light duty vehicles sold are electric no later than 2035 and that at least 50% are electric by 2030. The automakers cannot backslide and offer hollow promises that continue to go unfilled. We need a transparent public plan with clear near-term goals. We need automakers to support strong and truly transformative EPA rules for the upcoming model years 2027 and beyond that drive us toward the 100% zero emissions vehicles. And we need them to advocate for other climate solutions – build more clean energy, charging stations and transmission lines. The auto company CEOs must speak up in support of the legislation that will make this happen with the recognition that time is short and justice must be centered in all of our efforts.

Please sign the petition as a first step in our campaign for cleaner cars: