These congregations have been honored by Interfaith Power & Light for their outstanding efforts protecting creation.

Cool Congregations are united by their concern about climate change. They provide strong moral role models for their communities, and their activities have a ripple effect with people in their own homes. Here are some of recent winners of the Cool Congregation Challenge. 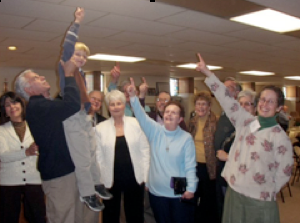 With the goal of reducing their carbon footprint by five tons a year, members of St. John’s (from both Environmental and Facilities committees) participated in a 6-week program through CT IPL called “This Old House of Worship.” They learned how to perform an energy audit, and how to calculate the energy and cost savings that would accrue if new lighting was installed. Their audit revealed the congregation could reduce its carbon footprint significantly by swapping out all the old lighting in the Undercroft, the parish hall, the Sunday School rooms, the hallways, the offices, and outdoors. Because they had already installed new thermostats last winter, the cost of $13,000 for new lighting was thought to be prohibitive. However, they gamely launched an “adopt a lighting fixture” for the entire congregation, and proceeded with the upgrade. Electricity usage since the upgrade has decreased by 1,328 Kwh, or 22%, over the same period in 2010. Also, because of the new thermostats, natural gas usage decreased by 15%, or about 1000 CCF over the past year. Over half of the lighting costs have now been covered by Creation-loving parishioners or parish groups, and the church is on track to decrease its CO2 emissions by five tons per year. 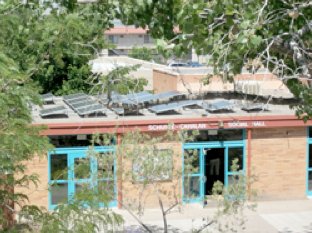 The Earth Web committee at First Unitarian Church of Albuquerque sponsors courses, sustainability fairs and forums on renewable energy to educate its church community. They explored solar, and after analyzing federal and state regulations, they developed a proposal for a straightforward lease arrangement between a vendor and the church, with the solar energy company handling all the regulatory and tax issues. The church has the option to purchase the system in seven years. The panels were installed on several campus roofs. The 48 kW system is estimated to generate almost 77,000kWh/yr, supplying about 75% of church needs. The solar company installed a ballasted system with no roof penetrations. The panels have a five-degree pitch and are not visible from the street. During the dedication ceremony with the whole congregation participating, they used water guns to do the ‘christening.’ The panels are expected to function for 25 – 30 years, and with net metering, the electricity will either be used directly by the church or will reverse the electric meter. They system will save about 42 tons of carbon dioxide per year and $70,000 in electricity costs over the 20-year term of the lease. The influence of this project has been felt in several arenas. Church members have gotten excited about the possibility of solar electricity and at least eight households have installed solar panels, producing a total of approximately 20.84 kWh/mo. 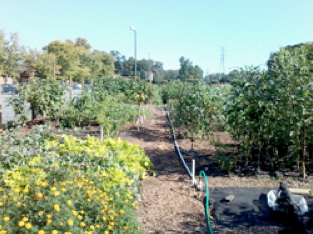 In furthering its ongoing environmental stewardship and education mission, Central United Methodist Church has created and completed several ground and water conservation initiatives in 2011. Located in an ethnically and socioeconomically diverse urban area of Charlotte, NC, Central has focused its efforts this year on creating a community garden to benefit congregants, local residents, and the church’s food pantry. This outreach provides an opportunity to grow produce on a small carbon footprint while educating the community about the many environmental benefits of “growing local.” Using volunteer labor and fundraising, Central developed 24 plots, including raised beds for handicapped access and irrigation from a natural water source. Formerly a barren area adjacent to the parking lot, the space was rife with clay, rocks and asphalt waste before volunteers “harvested” debris, tilled, amended and fenced the space. To preserve water and enrich soil, volunteers tilled in 48 cubic yards of compost made from county recycled yard waste. The majority of Central’s active membership of 125 people participated in the project. This year’s harvest was plentiful, providing locally grown produce to congregants, neighborhood gardeners, and the church’s food pantry, which serves families from Albemarle Road Elementary School, a local high-poverty, high-ESL elementary with whom Central partners. A celebration and fundraiser was held in October, where a meal including “fruits of the harvest” was shared by the congregation and neighborhood participants, along with a sustainability workshop covering composting to preserve water and complementary crop planting, combined with rotation, to preserve the land. 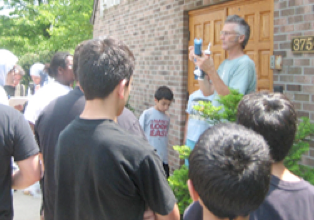 As of October, over one third of Congregation Beth Shalom’s households have reduced their energy use by at least one seventh (14%) and/or their carbon footprint to significantly less than half the average for an American household of their size. These reductions fulfill Beth Shalom’s Till & Tend Home Energy Reduction Pledge, signed by 39% of the households and ten of the twelve board members. Beth Shalom promoted energy reduction through: Hoosier Interfaith Power and Light’s Task of the Month Program; scriptural teachings; participatory intergenerational holiday programs; an interactive bulletin board featuring each month’s energy-reducing task; discounted supplies; and monthly newsletter interviews on what members have done and what challenges they face. Teams have been providing weatherizing assistance to household that requests it. Tweens from Christian, Muslim, and their own congregation weatherized the homes of older members, and a contractor worked with Beth Shalom and Islamic Center teens to insulate an attic. By reducing their congregational building’s energy usage by one seventh and equipping and inspiring over a third of their members to do the same, Beth Shalom has become Hoosier Interfaith Power & Light’s (Hoosier IPL’s) first Seventh Day Congregation. Their goal is to help create a tipping point, inspiring more of their members and other congregations in the city and state to follow suit. They have secured media coverage for many of their events and, through Hoosier IPL, will share their experience achieving Seventh Day status with congregations statewide.
—
2010 Special Overall Prize Winner
Towson Unitarian Universalist Church (TUUC)
Townson, Maryland

Towson won the Cool Congregations prize in 2010 for the most reduction in energy use. Carel Hedlund, Chair of TUUC’s Green Sanctuary Committee, said, “our actions focused on three areas: energy efficiency of our building, educating our members on ways they could make changes in their own lives to reduce their individual footprints, and participating in energy efficiency community projects. We are very excited and grateful to win this prize. Our Board voted to place the award funds into reserves for further ‘greening’ of the church.”

The Cool Congregation Challenge participants first calculated a starting carbon footprint, and then compared it a year later after making energy saving changes to measure total reductions. Towson Unitarian Universalist Church is a 50-year old congregation in suburban Maryland with many glass windows and skylights. According to Hedlund, they set out to reduce their carbon footprint by first conducting an energy audit. It was no surprise to members that the audit revealed a need to seal the old windows and the duct system. Hedlund estimates air leakage in the meeting room has been reduced 67% and heating and cooling capacity improved by 25%. Next, they installed solar film on skylights and on a large, southwest-facing window in the sanctuary and swapped out old light bulbs for energy efficient ones. They just recently replaced the front doors and one side door. They also purchased carbon offsets for some staff travel and 50% wind power through their utility. Interfaith Power and Light estimates that TUUC’s total carbon footprint has been reduced by nearly 20%. This is not TUUC’s first environmental award. In April 2009 they were accredited by the Unitarian Universalist Association as a “Green Sanctuary”. This month, Interfaith Power and Light has launched the 10% Challenge for congregations wishing to follow in the footsteps of Towson Unitarian Universalist Church in reducing total carbon footprint 10% or more. Interfaith Power and Light is a campaign of The Regeneration Project. The mission of Interfaith Power and Light is to assist congregations in being faithful stewards of creation by responding to global warming through the promotion of energy conservation, energy efficiency, and renewable energy.

Towson Unitarian Universalist Church (TUUC) of Maryland accepted the $5,000 cash prize for the most reduction in energy use. Carel Hedlund, Chair of TUUC’s Green Sanctuary Committee, said, “our actions focused on three areas: energy efficiency of our building, educating our members on ways they could make changes in their own lives to reduce their individual footprints, and participating in energy efficiency community projects. We are very excited and grateful to win this prize. Our Board voted to place the award funds into reserves for further ‘greening’ of the church.” Read more

Rev. Sally Bingham and NC IPL presented Pullen Memorial Baptist Chuch with the Green Energy Leader award for their extensive efforts to to care for creation in their recent renovation. Read more

Under the leadership of Pastor Nancy Wright and the church’s Care for Creation Committee, Ascension has implemented a comprehensive greening program that stems from what Pastor Wright calls a “deep sense that care for creation is part of the church’s mission.” Read more

First Unitarian Church of Salt Lake City is committed to both educating their community about climate change and encouraging members to act to protect creation. Read more

Over the course of six weeks, participants in Saint Matthew’s Carbon Fast saved or pledged a grand total of 50,000 pounds of carbon emissions. Read more

Haygood Memorial UMC is being recognized for its comprehensive efforts to conserve energy and raise awareness about environmental concerns. With the support of Senior Pastor Mary Lou Gilbert and the church’s Green Team, Haygood has implemented a wide variety of changes that have earned the church the title of a Cool Congregation. Read more

More success stories will be added to this page as Interfaith Power & Light honors continues to honor congregations for outstanding efforts in reducing carbon footprints and educating members about global warming.