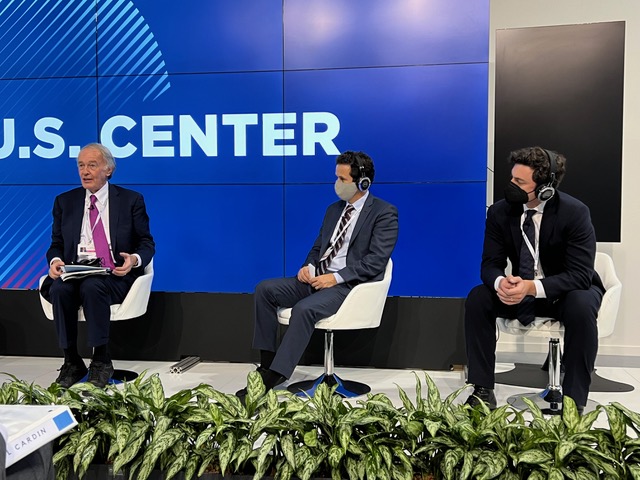 Yesterday I sat in the U.S. Center at COP26, listening to a group of U.S. Senators on the topic of Congress’ Role in Enhancing U.S. Climate Leadership and Ambition. Given the work that IPL does in advocating for policy change in the U.S., this seemed like a good use of my time.

There were, in total, nine Senators participating in this panel discussion, broken into two groups. There is one Senator whose words have not left my mind, and that is Senator Markey of Massachusetts.

When asked a question about population migration, he responded that we must remember that 40% of greenhouse gas emissions historically are from the U.S. “This is a moral issue,” he said. “People are dying, babies are dying.”

He went on to ask the question, “Who is a refugee?” He said that under current definitions, climate migrants do not qualify as having refugee status. “We need to change the definition of who is a refugee. We have to let them in, because we did this to them.”

Senator Markey called this a “moral clarion call.” His passion, his words, spoke to me of someone with deep moral and ethical convictions, and I won’t forget how he defined this issue.

For those of us working in and with faith communities, we know that people of faith have been working to resettle refugees for many, many decades. How will we respond to the increase in climate migrants that we are even now seeing in the U.S.? We must advocate for climate policies that will hold global warming to no more than 1.5 degrees Celsius, while at the same time providing funding for developing and island nations to adapt and relocate. It is the right and moral thing to do.