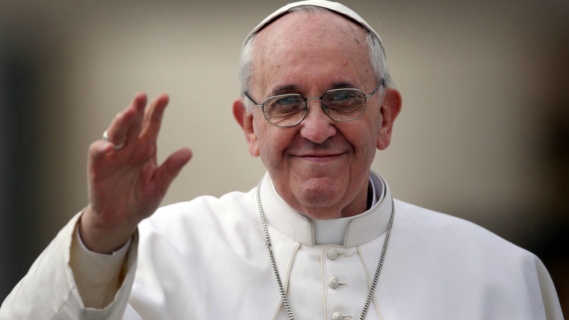 In his Encyclical, “Praised Be: On the Care of Our Common Home,” Pope Francis writes, of St. Francis:

His response to the world around him was so much more than intellectual appreciation or economic calculus, for to him each and every creature was a sister united to him by bonds of affection. That is why he felt called to care for all that exists. His disciple Saint Bonaventure tells us that, “from a reflection on the primary source of all things, filled with even more abundant piety, he would call creatures, no matter how small, by the name of ‘brother’ or ‘sister’”. Such a conviction cannot be written off as naive romanticism, for it affects the choices which determine our behaviour. If we approach nature and the environment without this openness to awe and wonder, if we no longer speak the language of fraternity and beauty in our relationship with the world, our attitude will be that of masters, consumers, ruthless exploiters, unable to set limits on their immediate needs. By contrast, if we feel intimately united with all that exists, then sobriety and care will well up spontaneously. The poverty and austerity of Saint Francis were no mere veneer of asceticism, but something much more radical: a refusal to turn reality into an object simply to be used and controlled. (pp. 11)

And there, by the eleventh paragraph of this text, I had found what seems to me to be the cornerstone of contemporary religious wisdom: we, as members of creation, must cultivate a desire to relate to the larger creation with a divine and natural reciprocity.

It has been the goal of my spiritual development, through my first twenty years, to cultivate somehow this relationship of reciprocity. More heavily, it can be said that this is the general goal of my generation: we have grown into a world in collapse, and we see that the only solution, if we are to survive on Earth, is to somehow learn to live in this reciprocity with creation, somehow learn to reset the balances in nature and in man. And so let this be a note of thanks: reading our hopes in the language of the Pope has given us more power to develop this reciprocity than we could have ever expected from this present day.

A few weeks ago I woke to find the news that our planet is turning through a sixth great mass extinction event. In the evening of that day I walked my dog down by the small primary school campus near my house. I know it as a place of redwoods, the canopies under which I played as a toddler – but walking past the campus that day, there they were, the redwoods, toppled and cut from the ground. Through the past few days the noise of construction has echoed up from that cleared patch of soil – they are putting up a new building in place of the trees. Perhaps this new building is necessary for the student body – I do not know if this is truly the case. But possible necessity aside, true and apparent within this image is an inability of the human will to develop in high relationship with nature. We all know and see this to be the case – it is unavoidable – we see it in the news, in our surroundings, every day – in all realms of human life, we are living in neglect of the respect due to the others of creation.

Watching Al Gore’s An Inconvenient Truth as a truly young child, I was terrified. Many other young people were as well: the concept that the planet will not be able to sustain human life if we do not totally altar the foundation of how we live, that is a terrifying and disabling transmission for a child to take. And the word disabling: I see it in so many of my peers, and in myself – under the weight of this imposing task, all that we want to do is wait, watch without action – in many ways, we see the course we are to take as impossible. All that we were trained to be – consumers, men and woman to work in a capitalist economy, accrue goods, drive cars, heat houses – the whole framework for the basic future we were shown to follow has been revealed to us to be against the good. So what are we supposed to do with that? The global future asks us to abandon this framework, and we simply freeze up, terrified at that request. We know not how to change.

Many kids at my college campus are searching for a system through which to change our consumer lifestyles. Their systems tend to hinge on the regulation of specific regions of their lives, but never are their systems comprehensive: they buy their groceries from the farmer’s market on Friday, but then drink themselves blind and sick on Saturday. Though they know the necessity to calm and regulate their desire to consume for themselves, and though they do act on that necessity to a certain degree, at the end of the day they are still not yet able to uproot the basis of their desire to over-consume. They work around it as best they can, but with the desire still there, it will always remain only a matter of time before they fall back into old tendencies, before they again begin to over-consume.

So allow me this kooky tangent, though really it is not a tangent at all: I had a dream the other night that changed my mind. In it I was in nature, facing some great mystic, and before him I found I was unable to proceed into a more developed state of soul. The mystic said to me, “The reason you are disabled is that you still allow certain aspects of your life to remain secular.” He then paused, and continued with the question, “Do you really not have the heart to see God in all things?” And at this I felt ashamed: yes, as a member of Creation I do inherently have the capacity to see God in all of this, but yet, in certain regions of my life, I refuse. This refusal is the basis of my stasis, the basis of the stasis seen in my thoughtful yet still over-consuming peers. To come to a place developmentally where all regions of our lives are attuned to the necessities of this day and age, we must learn to see God in all things – this cannot be a secular battle.

And then a week passed and I read, in the language of Pope Francis, of St. Francis’ seeing God in all of Creation. I read of the care that this brought out of him, of the totality of his attunement to the needs of nature and of man. And reading this, I found a reflection and confirmation of the desire we tentatively hold for our future. All motions we are making toward our destination are done with a lack of surety: the path we are moving is against the will of our popular culture, and our own starved desire to over-consume. Moving against this tide, it is so easy to fall limp and float back in the opposite direction. But what the Pope offers us in his text is a legitimation of our path and goal. So let the thanks be said again: reading our hopes in the language of the Pope has given us more power to develop a reciprocity with Creation than we could have ever expected from this present day – the benefit of that offering is incalculable, and for it, we are deeply thankful.